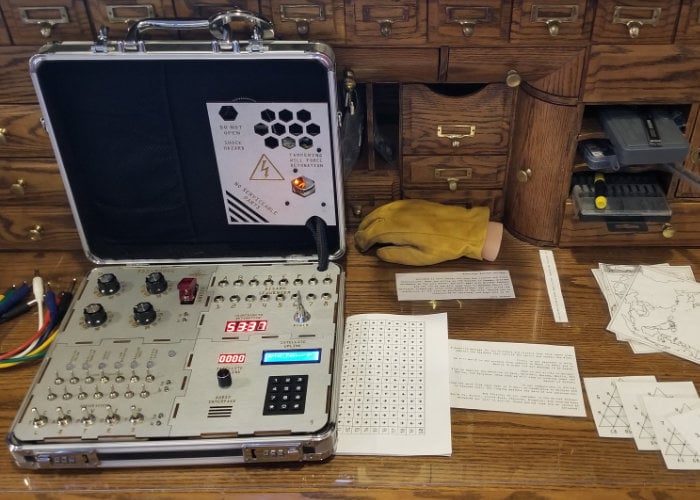 If you are short on space or time to create your very own escape room for friends and family, you might be interested in this awesome alternative which is included in a briefcase and starts with you having to decipher the clues to spring the locks. Once inside the case you are presented with a wide variety of different connections buttons and dials and knobs which you must process in the correct sequence to win the game. Powered by an Arduino Mega microcontroller the unique escape room case has been created by YouTuber Jason R.

“I created an “escape room-esque” game that is contained within a small suitcase. In total, there are about 15-20 puzzles and sub-puzzles that need to be solved in order to disarm the “explosives”. Players are given 60 minutes to arrange puzzles, decipher clues hidden in QR codes, connect cities in maps to form numbers, decode morse signals, and other similar things.

The completed puzzle, ready to be solved! This is was the player will see once they finally solve the clues to open the two case latches. Click here to see a simulated game play-through: The puzzle has begun! There are several laminated clues, a physical QR puzzle, a plastic decoder, a metal key, maps, a morse code key, and various other texts. In total, there are about 15-20 puzzles or sub-puzzles to solve to “disarm” the “bombs” scattered around the world. This is how the game starts. The player will have a folder with several documents that set the story line and an “intercepted message” that contains some brief instructions.

This video shows the sequence needed to solve the puzzle (along with some purposeful wrong entries) to show how the different components work. During an actual play-through, the player would need to reference and solve documents that are stored in the briefcase’s lid. “

for more photos of the bill jump over to the official project album on Imgur.