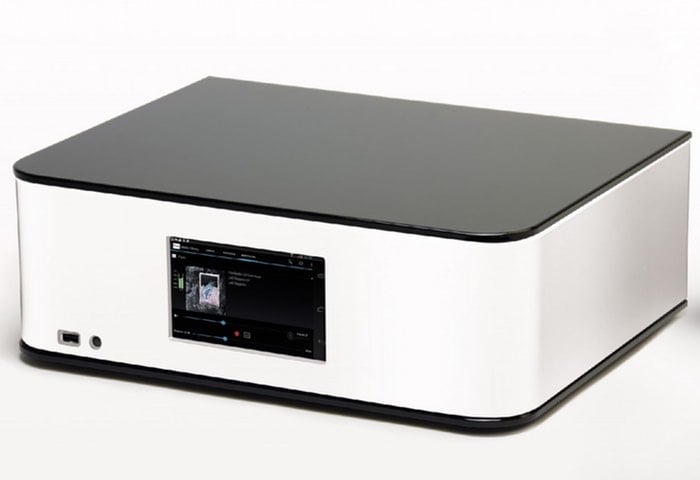 Entotem has taken to the Kickstarter crowdfunding website to raise £250,000 to help take its new Plato smart home entertainment system to market that is capable of digitising your vinyl collection.

The company says that their new hardware reimagines the home entertainment system and allows for both audio and video streaming products without being restricted by music formats.

Plato is an ‘All in One’ system, with an unrivalled set of capabilities, integrating HiFi amplification, together with media recording and streaming around the home. Allied to this Plato has been designed to fit in any modern home – no knobs or dials. Plato has an attractive design and is operated by a tablet or mobile phone with its own Android (iOS with your support in Kickstarter) controller app, or by direct interaction with the unit’s touch screen display. So with Plato you have access to all of your media, whether music or video, at the touch of an icon on your tablet. Key product features include:

– Unique Hi Res audio recording capability from Vinyl, cassette and CD. Just listen to your music and Plato will automatically record it and store it on its 2TB hard drive. We are not aware of any solution globally that makes recording your vinyl in Hi Res as simple and as easy as Plato.

– Audio stored on the hard drive can then be streamed to different UPnP devices and speakers around the home – multiple streams of different music can be played back at the same time. Plato can also stream media files stored on UPnP compliant NAS devices to either its own amplifier or other UPnP devices (e.g. Wireless speaker or Smart TV)

– Previously archived videos can be imported and stored on Plato’s hard drive using a simple Import function. These can then be viewed and streamed around the home to different Smart TV’s and tablets. Different movies can be viewed simultaneously on different devices from media held on Plato’s hard drive. Videos can also be accessed in the same way as audio files from network attached storage (NAS) devices.

– Plato’s integrated amplifier has been widely recognised by the HiFi industry as being a high-class design. The pre-amplifier includes a Phono stage, which can be configured for Moving Magnet and Moving Coil cartridges. We are very proud of the audio capabilities of Plato.

– Plato offers an unprecedented level of integration. Indeed, if you took all of the capabilities of Plato and reproduced them with a “separates” system, it would cost at least double the amount that Plato can be purchased for at UK RRP.

– Plato is built on the Android Platform and our software skills are all in-house. So firmware updates and feature enhancements will be automatically deployed, and are very easy to install when they become available, ensuring your investment is protected for many years to come.

If you think the Plato home entertainment centre is something you could benefit from and would enjoy using jump over to the Kickstarter website via the link below to make a pledge and help the new system make the jump into production.