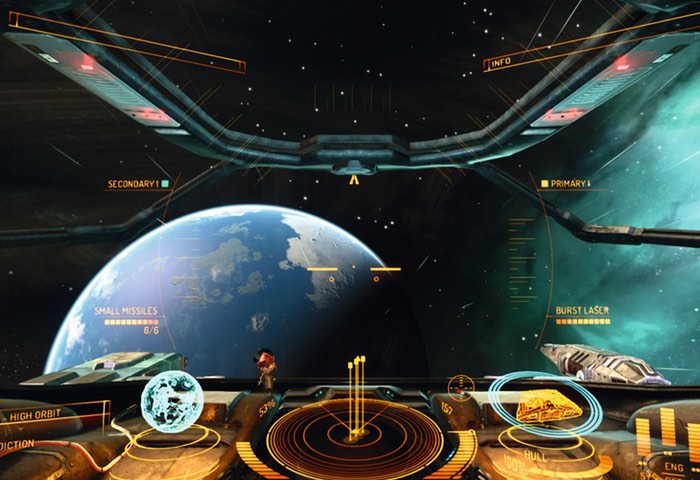 Paul James from the Road To VR website has had a chance to play Elite Dangerous using the new HTC Vive virtual reality headset and was one of the very first to publish a playtest using the original Oculus Rift SDK 2 when it became available.

Watch the video below to enjoy the playtest using the Oculus Rift and also read about the experience James had using the HTC Vive VR headset at this year’s EGX at Birmingham’s NEC in the UK.

Stepping into the HTC Vive was an interesting and useful chance to benchmark progress the display tech found in these headsets has advanced. You may be surprised to learn that Vive’s 1080×1200 per-eye resolution isn’t as big a leap as you might expect, when compared to the DK2’s 960×1080 per eye. It is better, there is more detail, but the game’s orange-on-black hues are very good at finding that screen door effect, or at least the equivalent for Pentile OLED panels such as these.

As a result, perceived resolution is probably lower than it would be when displaying virtual worlds with lighter, more naturalistic hues, but those gaps between pixels are still there and still readily noticeable. It’s an incremental and noticeable difference then, but not a game changer.

Field of view on the other hand is incrementally but noticeably improved. That feeling of being wrapped in a starship’s cockpit only occasionally ruined by wayward extreme glances to the periphery of your vision for those telltale black borders, but for the most part this does not intrude at all.

In terms of fluidity, it was a great experience – with low persistence of vision delivering silky smooth head pans and tilts, delivering the feeling of an expansive window on a world rather than a display floating in front of your face. But as a useful benchmark against the Vive’s biggest rival, in a seated more traditional gaming experience, the developer edition of the vive is almost identical to the Crescent Bay and forthcoming Consumer Oculus Rift. However, the new Rift ergonomics are much improved over the early Vive kit, which will no doubt improve