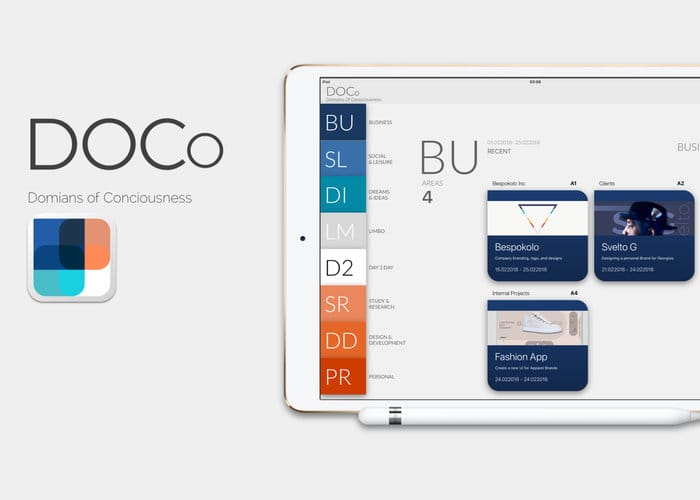 Designers, makers or developers that use their iPad as a creative tool may be interested in a new application designed by George Butler called DOCo. The new iOS application has been specially designed to enable users to interact with notes, thoughts and ideas in a more intuitive way. Watch the demonstration video below to learn more about the new creative app and its features.

Designer George is based in Philadelphia and explains that the concept behind DOCo is to create spaces where notes, thoughts, ideas and revisions can be brought together to aid with “Mindscaping”. DOCo has launched via Kickstarter to raise the $2,000 required to help take pre-orders for the application.

Pledges are available via Kickstarter from $4 allowing you to preorder the app with delivery expected to take place during March 2018 when the app is published to the official Apple iOS App Store. DOCo facilitates “ease of storage and retrieval in the moments when you need to get to something you notated previously, a journal entry with a video of a favourite moment or when you what to transcribe something quick but need it to be in specific place”.

For more information jump over to the official Kickstarter campaign page to preorder your DOCo application which has been created to provide a new way to create store, interact, and retrieve notes, thoughts, vision boards, ideas and more.