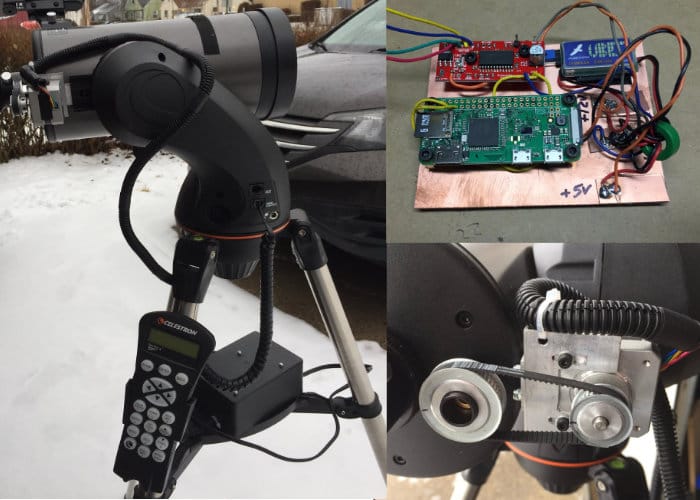 Astronomers that own a Celestron 127 SLT Maksutov/Cassegrain telescope or find adjusting the focus on their telescope a little tricky and would like to add hands free focusing to their optics. May be interested in a new Raspberry Pi project which has been published by Jason Bowling, providing a step-by-step instructions on how to transform the mid-priced Celestron 127SLT telescope into a stargazing dream with hands-free focusing system.

Using a £5 Raspberry Pi Zero mini PC together with a stepper motor allows for a more accurate focusing system without the need to touch the telescope in any way. Jason explains a little more behind the inspiration behind the Raspberry Pi powered autofocusing system. “One of the tradeoffs with the mid-price Celestron 127SLT is that it shakes rather badly when you touch it, and takes several seconds to settle down. I’m focusing using a Bahtinov mask and Sharpcap’s Bahtinov aid, which gives a numeric indication of the accuracy of your focus. It can be a slow process to focus it since you tweak, wait, and tweak again.”

Jump over to the Short Circuits and Infinite Loops Blogspot by following the link below for full details on the project and how you can convert your Celestron 127 SLT Maksutov/Cassegrain to have fully auto focus thanks to the awesome Raspberry Pi mini PC and the ingenuity of the projects maker.