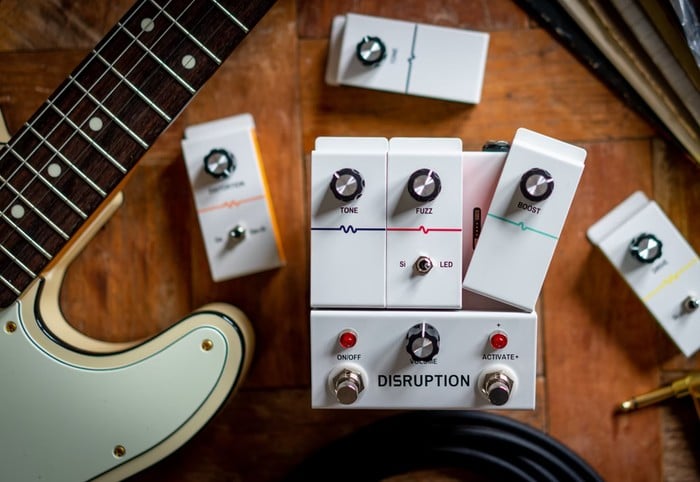 Musicians and especially guitarists may be interested in a new guitar pedal named Disruption created by the engineers at Modal Effects. With analogue roots and using modular technology the Disruption guitar pedal has been created to provide guitarists with an all-in-one gain pedal with sounds ranging from clean boost to gritty fuzz. Backer early bird pledges are now available for the inventive project from roughly $259 or £196 (depending on current exchange rates).

“DISRUPTION is a modular guitar pedal that uses interchangeable Mods (modules) to allow you to create a wide range of sounds. Because each new combination of Mods creates a unique effect, DISRUPTION gives you a level of customization not possible on traditional analog pedals. With tone stacks, combined with boost, overdrive, distortion, and fuzz Mods, DISRUPTION is an all-in-one gain pedal. We’ve spent the last five years designing DISRUPTION to push the boundaries on what a guitar pedal can be and are excited to be releasing DISRUPTION here on Kickstarter. Help us bring our project to life by clicking on Back this Project or keep scrolling to learn more.”

“The DISRUPTION Base has three slots for Mods. The signal runs through the three Mods in series from right to left, following the signal chain of the input and output jacks. Changing and reordering Mods changes the sound. It’s as simple as that. The ability to quickly reorder your Mods is one of the key features of DISRUPTION. Try stacking multiple gain stages, shaping your tone before or after your gain stage, or boosting your signal before or after your drive. DISRUPTION is a one-stop-shop for experimenting with your dirt sound.”

For a complete list of all available pledges, stretch goals, extra media and detailed specs for the modular guitar pedal, jump over to the official Disruption crowd funding campaign page by following the link below.