Disney Research have developed a new and innovative concept called SideBySide which provides a method for gamers to be able to interact with each other using projected characters. The SideBySide system projects images onto a surface which then become aware and responsive to other nearby projections.

Currently the system allows for interaction within games and also to allow enables applications to exchange data via a “dragging and dropping” method from one person’s projected image to another. Watch the video after the jump to see the new SideBySide Interactive Projectors in action. 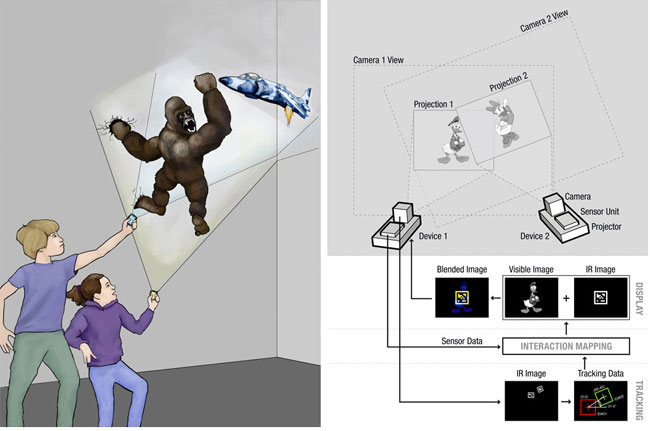 The SideBySide system does not require any fix sensing within the gaming area and can be used anywhere, such as in the office, home or even in the car. The hybrid mobile projector provides both visible and invisible projections at the same time. The invisible projection contains all the tracking data which is then recognised by the device camera, enabling accurate location tracking of a number of projections at the same time.

The SideBySide concept is still currently under development so don’t expect it to appear on shelves very soon, but when it does it’s sure to add a new dimension to interactive gaming.

The SideBySide project is being developed at Disney Research Pittsburgh and the Computational Design Lab / DevLab and Carnegie Mellon University. For more information jumper to the Disney Research website.