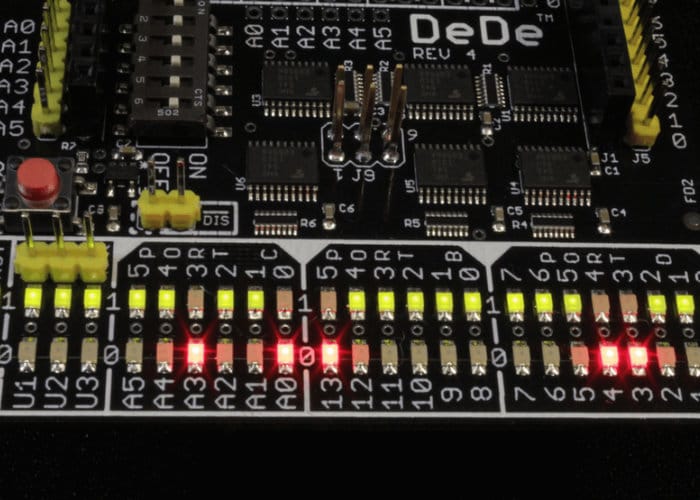 Arduino and electronic enthusiasts searching for a debugging development shield that can be used with a wide variety of Arduino development boards and their compatible counterparts. Maybe interested in the DeDe or DEbug & DEvelopment Shield created by electronics developer Bill Brown. Watch the demonstration video below to learn more about the Arduino shield that allows you to see what your Arduino project or any development board with a compatible footprint is doing at a glance.
Designed to specifically make debugging Arduino projects easier and quicker the DeDe is capable of providing quick feedback on the logic state of any GPIO pin with bright red and green LEDs, even pulses as short as 1ms can be seen without any additional hardware required. Allowing users to quickly connect
A DMM to measure voltages
An oscilloscope to view waveforms
A protocol analyzer to decode SPI/I2C/UART communications
A function generator to drive signals into the circuit
A counter/timer to measure timing
Specifications of the DeDe include :
– Compatible with nearly ANY board having Arduino UNO compatible headers.  Some boards may have clearance issues. Adding a “dummy” prototyping shield as a spacer in between usually solves the problem.
– Works with both 5V and 3.3V boards!
– Individual pairs of red and green LEDs with on-board drivers for displaying high/low status for each of the port pins, all located along one edge and extended out beyond the standard Arduino shield for easy viewing of all pins – even when placed in the middle of a shield sandwich!
– Virtually no loading on the GPIO pins, only 100Kohm pull-up resistors to keep the buffer inputs from floating – the LEDs are NOT driven directly by the GPIOs!
– 3 user signal inputs with LEDs available to the user for probing other signals
– One channel dedicated to the RESET signal helps catch those unexpected resets!
– A 6-position DIP switch for connecting/disconnecting the board’s input buffers and 100Kohm pull-ups from the analog inputs (A0-A5) for sensitive applications that might be affected by the pull-up resistors
– Probe pins on 0.1″ male headers adjacent to the shield sockets are for external probing with oscilloscopes, logic analyzers, protocol analyzers and DMMs. They also make it easy to connect to boards that aren’t shield compatible!
– Two GND posts for grounding test equipment
– A prototyping area with all shield signals and power brought out for creating your own circuits and is also compatible with 170 tie-point breadboards (not included), just drop it in place!
– A 2-pin disable jumper (marked “DIS”) is provided for disabling the LED circuits lets you conserve power when they’re not needed, or wire it to a GPIO pin and control it from a sketch to build some creative LED patterns!