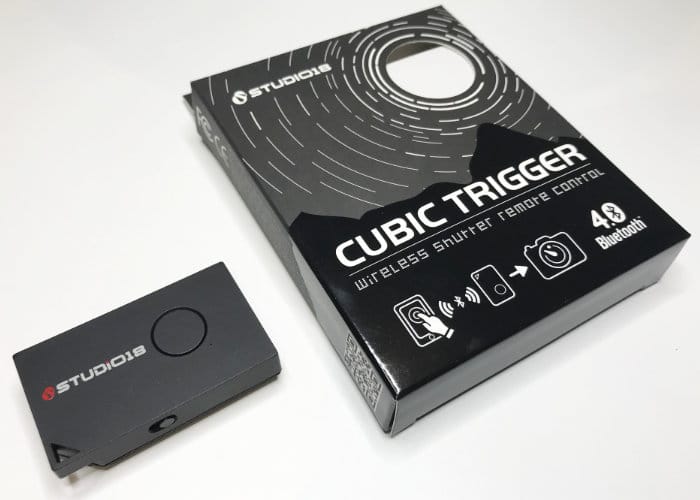 Photographers looking for a lightweight yet comprehensive wireless remote shutter controller for their DSLR or mirrorless camera. That can be operated wirelessly directly from your smartphone using a fully featured companion application, may be interested in a new piece of hardware called the Cubic Trigger, designed and developed by Studio18. The Cubic Trigger companion application provides a wealth of additional features on top of merely allowing you to open and close your camera shutter either remotely or using the manual shutter button located on the top of the unit. From today the Cubic Trigger wireless camera remote control system is available to back via Indiegogo. 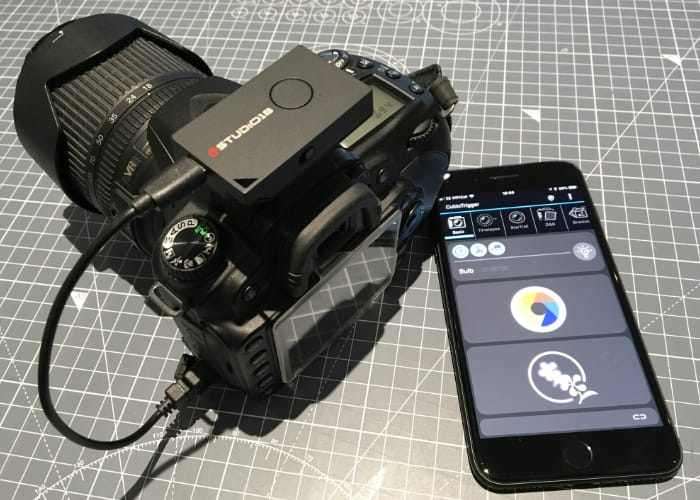 Ahead of the launch of the on Indiegogo the development team behind Cubic Trigger have allowed us early access to both the trigger and the wireless smartphone control application, for a hands-on review of its initial prototype. The small camera shutter remote comes supplied with a selection of cables that allow you to connect the device to a wide variety of different cameras from manufacturers such as Nikon, Sony, Canon and more. Even my older Nikon D90 camera, which is still a great workhorse, although I have been tempted a few times to upgrade to the new Nikon 7200.

The Cubic Trigger wireless camera shutter trigger comes supplied with full instructions and ships with a CR2032 button battery capable of powering the trigger for up to six months and enabling you to get up and running straight from the box. Once the trigger is connected to your camera using one of the supplied connection cables, the small sensor can neatly clipped to your flashgun shoe using the provided adapter. If you need to take photographs using your cameras pop-up flash the extremely lightweight camera trigger can easily be left hanging to one side using the accompanying connection cable without any problem, and still provides a Bluetooth 4.0 connection directly to your smartphone. 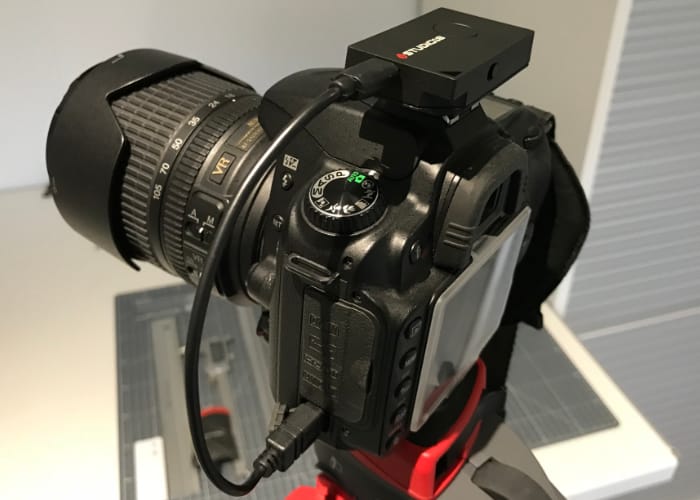 The Cubic Trigger companion application is available for both iOS and Android devices and once installed easily allowed my iPhone 7 Plus smartphone to recognise and connect directly to the camera trigger via Bluetooth. After a few seconds, the connection was established I could immediately start firing the D90 camera shutter direct from my smartphone. The companion smartphone application is clean and easy-to-use and provides quick access to seven main features via a menu system positioned across the top of your smartphone screen. On the first screen, “Basic” controls such as self-timer and a manual camera shutter trigger and quick focus both of which are available using a fast and intuitive drag-and-drop motion. The “Basic Self Timer” mode can be set from anywhere between 1 and 99 seconds giving you plenty of time to use to your advantage. As well as providing a quick lock to prevent shutter miss-fires and a handy Mirror-Up feature. 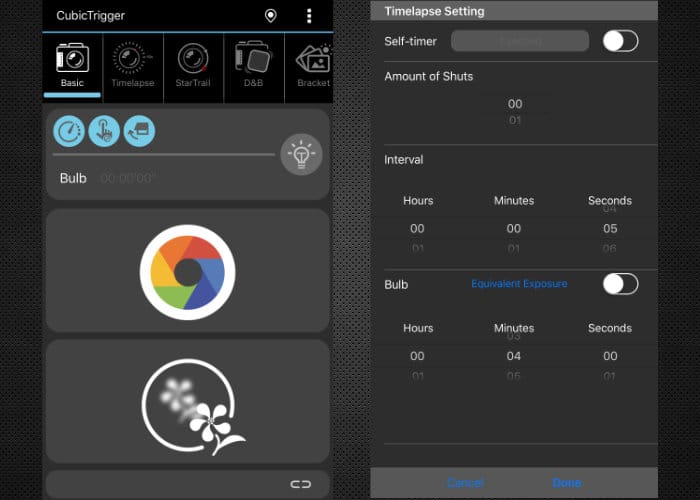 Moving onto one of my favourite features the Time-lapse mode, this features enables you to quickly set interval timing in hours minutes or seconds depending on your needs. As well as allowing you to select the number of shots you would like to perform. Exposure ISO and Aperture can also be tweaked further if required, directly from your smartphone removing the need to adjust your camera and enabling you to focus on framing. From this screen, options are also available to tweak exposure conversion using the Bunsen-Roscoe Law. Also a handy delay can be set before your first shot is captured and the time-lapse sequence is started. 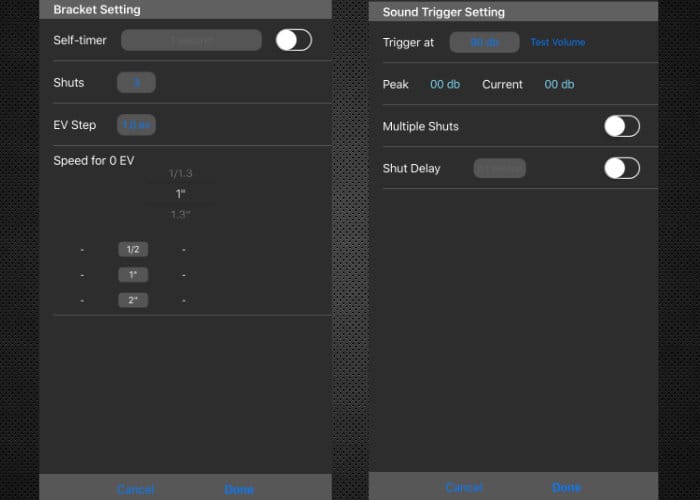 The next future accessible from the smartphone application is “StarTrail” and as the name suggests allows you to capture the night sky and once again offers exposure control as well as the ability to set up the number of shots you would like to capture and speeds intervals whether it be in seconds, minutes or hours. 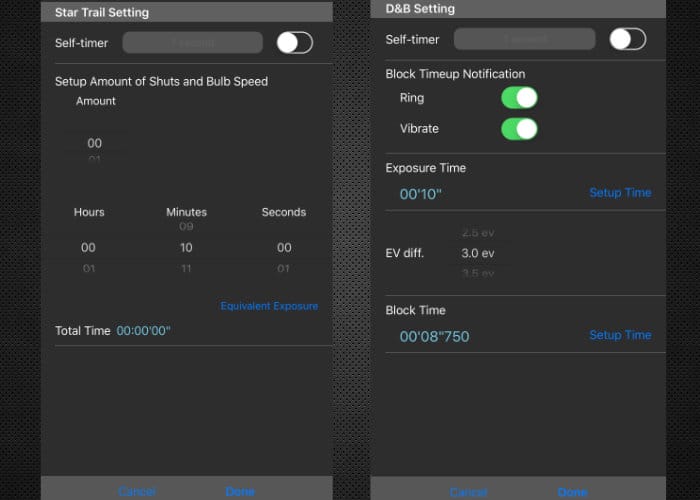 The fourth feature accessible via the app is D&B or Doge & Burn allowing you to become even more creative with your photography, directly from the convenient interface on your smartphone, rather than having to fiddle with any settings on your camera or during post-processing. Next along is the Bracketing feature that allows you to easily make sure you can produce images with a high dynamic range and plenty of detail. Bracketing your shots will enable you to take multiple pictures that are slightly brighter and slightly darker than your standard shot allowing you to control and compose more details images afterwards. Options are available to take up to nine bracket images providing plenty of scope for creativity and to capture that perfect picture. The developers have also included a handy self-timer and EV step which can be set in steps of 0.3, 0.7, 1 and 2 depending on your requirements. 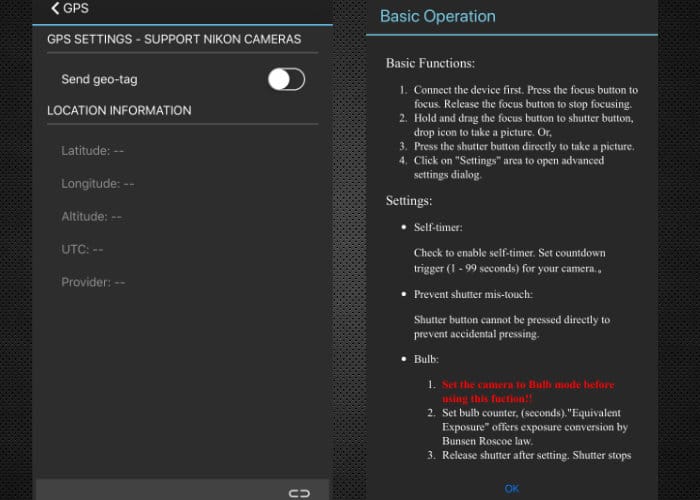 Second from last is the Schedule feature that enables you to set a time and date for your camera to trigger and capture images, handy if you need to leave your camera to capture shot automatically. The application will also allow you to enable “focus before shot” to make sure the camera is correctly set before a photograph is captured. Finally, the last feature accessible via the top menu is the Sound function. Enabling you to trigger the shutter at certain sound volumes ranging from 70 dB up to 90 dB again depending on your requirements. This feature also offers the ability to capture multiple shots and even delay the shutter speed between them. Another handy feature included in the application is the ability to GPS tag your photos automatically allowing you to record the exact location from where the photo was captured. This feature is especially good on older cameras such as my Nikon D90 which doesn’t come with the GPS geo-tagging feature as standard. 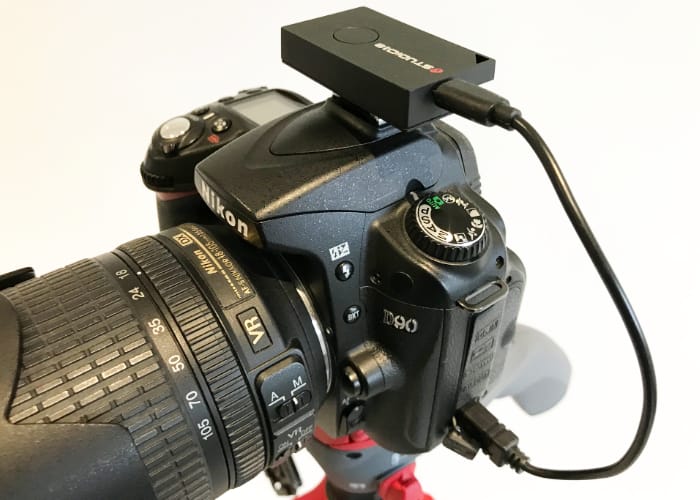 Studio18 have launched the Cubic Trigger via Indiegogo and it is now available to back with early bird pledges starting from just $30 for the first 200 lucky backers. Offering the first 200 backers a huge 49 percent discount off the recommended retail price of $59. After the first 200 units have been sold the price will rise to $39 which is still offers a terrific discount of 33 percent and is available to all Indiegogo backers during the campaign. When the campaign finishes, worldwide shipping of Cubic Trigger is expected to take place during February 2018.

Each Cubic Trigger box includes the excellent remote control unit, hot shoe flash mount, handy loop strap, CR2032 Battery and cable pack allowing you to connect the trigger to a wide variety of different cameras including Nikon, Sony, Cannon and more. For a full list of all supported cameras jump over to the official Indiegogo crowdfunding campaign page via the link below.