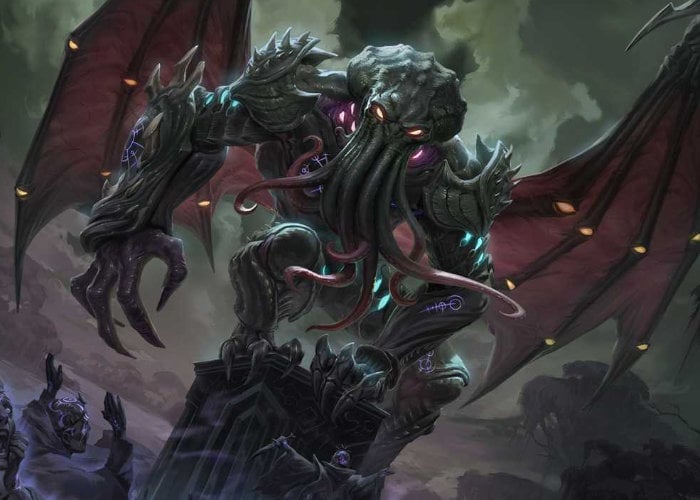 Smite players will be pleased to know that from next month, June 2020 one of the most mysterious Gods in Smite history will be available to play. Cthulhu brings a recognition factor in name and visuals that rivals the most prominent gods in all mythology. “Terror will be widespread within the Smite universe as long as he reigns!”

“The Great Dreamer has awakened! Cthulhu has lain submerged and sleeping in his watery tomb for untold aeons. But soon, Cthulhu will enter Smite: The Battleground of the Gods, to spread madness and fear! Who is this eldritch deity, and how does he fit into the world of Smite? Read on for an exclusive early look in Cthulhu’s creation, and find out what awaits you when he arrives this June!”

Features of Cthulhu in Smite :

– Just as in the stories, Cthulhu will be able to drive enemy gods insane, causing them to experience a wide array of effects – including a whole new set of audio/visual confusion elements
– Cthulhu then feeds on the gods’ madness. He can hit insane gods with a specific ability to “Break” them. He becomes permanently tankier each time he successfully Breaks a god.
– A unique scale. Cthulhu is in a distinctly unique size range that is larger than all the usual gods, but not as tall as Jormungandr. It should be noted that Cthulhu will move, attack, and be attacked within the usual Smite play space.
– This scale concept is pushed to the limits during his ultimate ability, which changes his visual appearance while making him the largest god in Smite history to remain within the traditional play space while scaled up.
– Theme – Madness – Cthulhu’s visual appearance and powers are designed to inspire psychological horror in his opponents.
– Visuals – Monstrous – The recognizable octopus head sets up a clear template for Cthulhu as a terrifying beast from the darkest depths of the ocean.
– Personality – Nihilistic. Cthulhu holds no respect for human life, nor the gods of Smite. He sees them as insignificant beings who are utterly worthless within his universe.
– Perspective – Fear. The gods know nothing of Cthulhu, which scares them. Once they see him and begin to know what he is capable of, they fear him even more.

“Within the Smite universe, Cthulhu will serve as a symbol of consequences for the gods. Gods are immortal and powerful, and thus they rarely consider the repercussions of their actions. Currently in the Smite lore, the world has fallen to a strange, magical corruption because of Persephone’s poisoning of the World Tree. Little do the Gods know that even as they rush to subvert Persphone’s plan of destruction, far deadlier forces are preparing to rise and threaten the world. The gods have triumphed over strength and power before, but can they triumph over the darkness hidden within their own minds? “