H.P. Lovecraft is a unique occurrence in the history of letters. A gifted polymath and eccentric recluse (aren’t they always), his entry into writing came at a point in his life where, to put it bluntly, he had nothing much to do. A funny factoid since dear H.P.’s dalliance with writing had its first spurts during World War 1. Unfit for soldiery, H.P. would spend the flower of his youth preoccupied with what would pass as the early 20th century equivalent of an exclusive discussion board involving like-minded  part time fictioneers who never made any money. 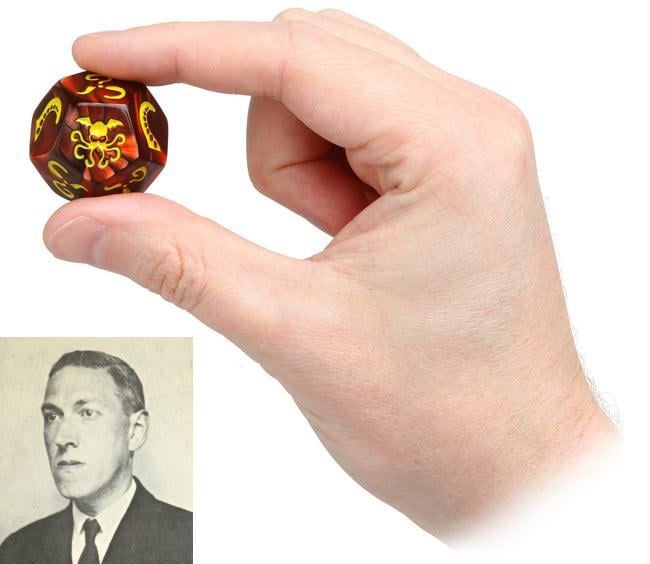 Despite the fact that his career in letters was fruitless in his own lifetime—he died early too—and most of his stories were temporarily forgotten in the pulp pages where they were published, H.P Lovecraft bestowed Cthulhu upon our imaginations. Now comes this novelty Cthulhu dice for the believers out there. On the product page I reads:

This quick and sanity-eroding dice game is a lightweight filler game for 2-8 players cultists. Your goal is to destroy your rival cultists by driving them mad as quickly as possible. Beautiful custom 12-sided dice are embossed with tentacles, Elder Signs, and Cthulhu himself. But be careful! Rolling Cthulhu will drive EVERYONE to insanity, including you. Last sane cultist wins!

Throughout his strange life, H.P. Lovecraft cultivated an appetite for the bizarre. If he were alive today it’s a sure bet he’d dig this creative take on his most enduring creation.