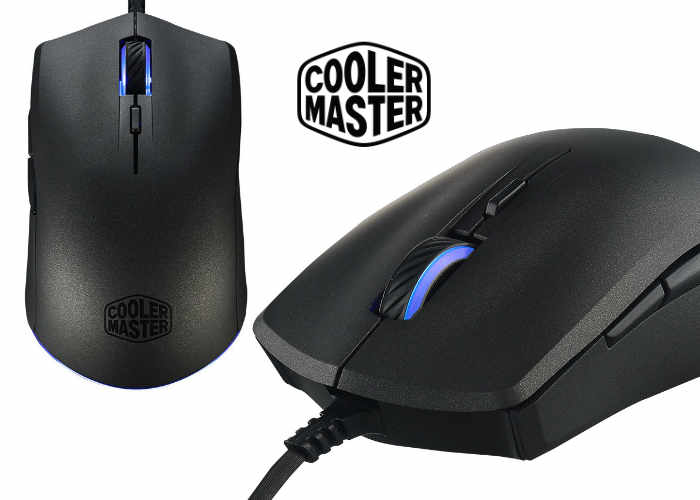 Cooler Master has this week added two new affordable gaming mice to its range of peripherals in the form of the MasterMouse S and Lite S which will be available to purchase throughout Europe priced at €40 and €20 respectively.

The MasterMouse Lite S the cheaper of the two gaming mice looks very similar to the more expensive S but is equipped with LED illumination in two zones and a PixArt PAW3509 optical sensor that delivers up to 2000 DPI in three preset levels.

ThisWhile the The MasterMouse S uses a PixArt PMW3330 optical sensor that enables you to switch between four customizable DPI levels from 400 to 7200 DPI. All the DPI values are provided without interpolation, and the mouse also doesn’t use acceleration. Thanks to this, the MasterMouse S has true 1-1 input tracking.

The body of the mouse offers six buttons, out of which five can be assigned a secondary function that can then be activated via Cooler Master’s “Storm TactiX” button, which is also optional. Storm TactiX can be easily understood if we look at it as the “FN” button we usually find on notebooks. The name of this function is taken from Cooler Master’s “CM Storm” heritage that it previously used for gaming products.

Thanks to the built-in 32-bit ARM processor and 512KB on-board memory, the MasterMouse S can save macros and all settings for up to five profiles, with everything being saved on its onboard memory. This means that your settings go wherever your mouse goes instead of being confined to the computer you normally use.

Customizable Full RGB Illumination – Two RGB illumination zones – one along the rim of the mouse wheel and one at the back-bottom edge – can both be customized with a full spectrum of 16.7 million colors as well as a wide range of lighting effects that can be assigned to each of the zones independently.

All of the illumination settings, button functions, macros, DPI levels and various sensor settings can be pre-programmed via Cooler Master’s Portal that comes with the mouse.

Durability Inside and Out – The surface of the MasterMouse S is covered with a matte UV coating that doesn’t wear off easily and is resistant to fingerprints. Both of the main buttons are equipped with Omron switches guaranteed to last 20 million clicks, while the cable strain relief has also been built extra strong to endure long-lasting gaming usage.