Today details of the new Child of Light Deluxe Edition game have been released by Ubisoft this week and its is now available to pre-order directly from Steam and Uplay.

The Black Queen has stolen the Sun, the Moon and the Stars. You play as Aurora, a young princess with a pure heart whose soul is brought to the kingdom of Lemuria. 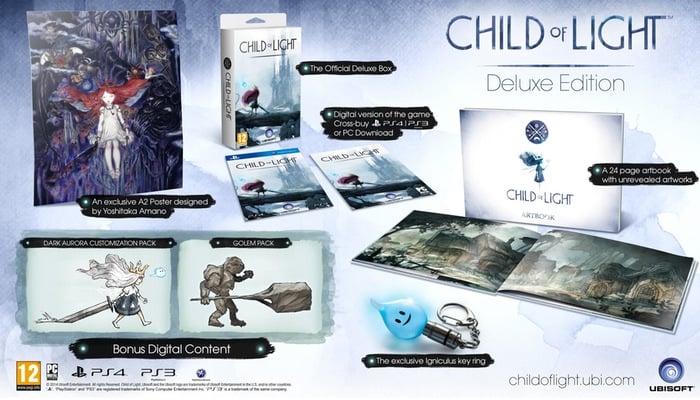 “Child of Light is a reimagining of classic fairytales, inviting players on an epic adventure into the magical painted world of Lemuria. Players will uncover mysteries, participate in turn-by-turn combat inspired by classic JRPGs, and explore a mystical kingdom.

The game puts players in the shoes of Aurora, a child stolen from her home, who, in her quest to return, must bring back the sun, the moon and the stars held captive by the Queen of the Night. Helped by her companion Igniculus the firefly and several unlikely allies, Aurora will face her darkest fears, including dragons and other mystical creatures, in this modern take on a coming-of-age story.”

For more information on the new Child of Light game jump over to the official website for details. Features include Classic RPG turn based combat, 600+ crafting combinations, Deep crafting system, Wonderful world to explore and 200+ skills to unlock.