If you happen to gawk at this for a couple of seconds, the effect is quite hilarious—and yes, cheeky. The pic below is currently being displayed on several billboards in Karachi, Pakistan thanks to RG Blue Communications, an ad agency who’ve just had a lightning bolt idea for marketing sanitary napkins. You read that correctly: sanitary napkins. 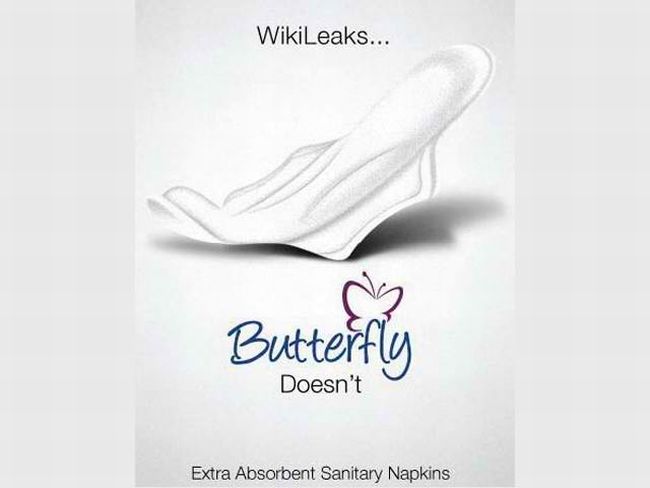 Of course, explaining the not-so-subtle cheekyness involved is unnecessary. What is necessary though, is to delve into the mind who came up with it. So here’s Munir Bhatti, art director for RG lue Communiations: “I could have also shown a girl like other ads have. But the idea was to make it very different and to use the word WikiLeaks — and that’s what this is.”

Also, business development honcho for RG Blue Communications Amjad Hussain adds that expansion is on his company’s sights: “There are a couple of billboards; one is near the Expressway and the other is in Hyderi. There will be one in Karsaz next week.”

We ourselves believe this is quite a timely work of ad cleverness. After all, in a world inundated by products, the advertiser’s job is to make that emotional connection with the faceless public, most especially the ever-important target market. Bravo, RG Blue! Bravo!