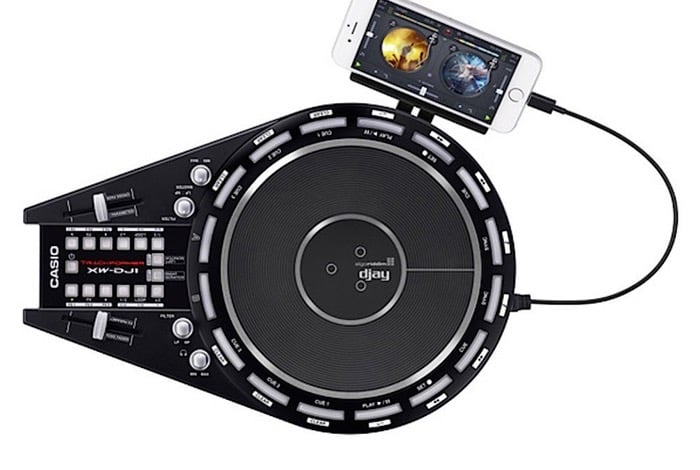 Ahead of the upcoming NAMM 2015 music showcase event starting later this month on January 22nd, Casio has this week unveiled two new additions to its range of DJ controllers in the form of the new Casio XW-PD1 Groove Center and XW-DJ1 controller.

The Casio XW-PD1 Groove Center is expected to start shipping in March 2015 and will be priced at £400 and offers users a 7 inch platter that’s designed to replicate the feel of an analog turntable.

The XW-PD1 is equipped with an outer ring containing 16 buttons, enabling users to check the current rhythm pattern at a glance, says Casio. Who have equipped the XW-PD1 with drum sounds for a variety of styles such as Hip Hop, Trap, and House.

It also allows the creation of rhythms and phrases with the pads as well as the ability to apply DSP effects such as roll, filter, bit crusher, break, and pitch shifter. Stephen Schmidt, vice president of Casio’s Electronic Musical Instrument division explains :

“Electronic Dance Music is here to stay and with its ever increasing popularity, we wanted to offer fans a way to become part of this epic music movement,”-“Casio’s new Trackformer series offers a variety of easy-to-use features that are ideal for aspiring DJs and musicians who are ready to set the stage at a party, produce beats and perform.”

The XW-DJ1 will be made available later this month for £299 and has been designed to integrate with the awesome Algoriddim’s djay2 iOS and Android application allowing users to control control of cue points, tempo sync, effects, looping and more.

For more information on the new Casio DJ controllers jump over to the Casio press release for details.