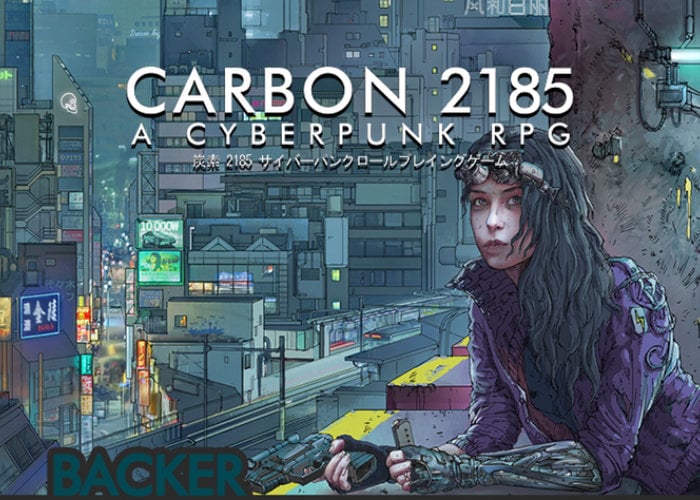 A new tabletop RPG has been created by Dragon Turtle Games based in the UK called the Carbon 2185, offering players a Cyberpunk RPG inspired by the likes of Blade Runner, Ghost in the shell, Carbon Sci-Fi video games and more. Watch the introductory video below to learn more about the Carbon 2185 cyberpunk RPG which is based on Dungeons & Dragons 5th Edition rules.

Play as a Cyberpunk, a rebel refusing to live life by the rules of the oppressive mega corporations that rule San Francisco in this high action tabletop roleplaying game. “Carbon 2185 gives you the chance to play in the cyberpunk worlds you’ve seen in movies, television shows, and video games. The Core Rulebook is the only thing you need to run and play hundreds of hours of games in the world of Carbon 2185, and to enjoy our upcoming line of adventure modules, heists, and tales of corporate espionage using this innovative game system.”

The Core Rulebook also contains invaluable information for the Game Master, such as:

– An entire Starting adventure designed to teach you everything you need to know to run the game, and teach the players how to play it. This adventure should last between 3 and 5 sessions!
– Dozens of NPC Statblocks and templates to create an infinite amount of enemies and adversaries.
– Loot tables! Ever wondered how many Wonlongs that streetrat your players just blew a hole in had in his pocket? Just roll on the table to find out!
– World Building! We have dozens of pages of world building to tell you everything there is to know about 2185, from the gangs and gangsters, to the corporations and their CEOs!
– Detailed Economy! Tired of abstract economies in ttrpgs? Well look no further! Carbon 2185 has a highly detailed economy with reference tables and charts to help you instantly know how much a bowl of street ramen costs, a glass of upscale whiskey, or how much a hacker might charge to access an unsecure security feed.

– More Fantastic Art! UNLOCKED! We have plenty of art already, but plenty of art is never enough! Because we’ve hit this tier, we are able to get Klaus to do even more great art for us! The Core Rulebook will include an extra THREE double page illustrations by our fantastic cover artist!
– Pregenerated Characters! UNLOCKED! Alongside all the other rewards, we will include PDFs of 12 pregenerated characters for those who want to get into the game as quickly as possible! These characters will be inspired by your favourite cyberpunk characters so that you can easily recreate your favourite Movies and TV shows.
– Free PDF Adventure! That’s right! If we hit the ambitious goal of £30000 we will release a free PDF adventure in September to all our backers at the Cyber Ninja tier and above! This adventure will follow on directly from the adventure in the Core Rulebook