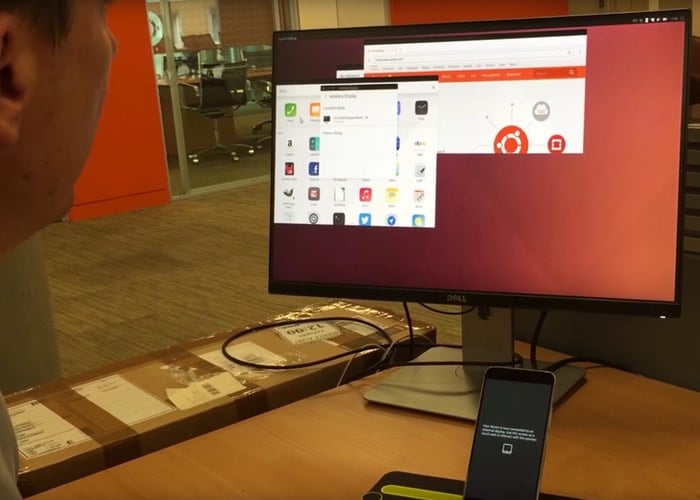 If you are looking for a way to transform your Ubuntu smartphone into a pocket desktop PC you might be interested in a new update which is being rolled out by Canonical this week in the form of the Ubuntu Touch OTA-11 Update.

Once installed on the Meizu Pro 5 Ubuntu Edition smartphone that is equipped with a 5.7 inch full HD AMOLED display and powered by a Samsung Exynos 7420 octa-core processor supported by 3 GB of RAM together with 32 GB of internal storage. Check out the video below to see the connection process in action.

The pocket smartphone can be transformed into a desktop computer thanks to the new support which has been added that allows users to connect an external display using the Miracast wireless display protocol. Brad Linder from the Liliputing website explains more :

Ubuntu for phones and tablets supports a feature called “convergence” which lets you interact with a desktop-style user interface when you’re using a keyboard, mouse, and external display. But up until now the only Ubuntu device to support convergence had been the BQ Aquaris M10 Ubuntu Edition tablet, because it was the only device with the right software and with a video-out port.

Now that the mobile version of Ubuntu supports wireless displays though, you don’t need a video port anymore. Just use a Miracast wireless display dongle to connect the phone to a monitor, connect a Bluetooth keyboard and mouse, and you’re good to go. When convergence is in use, the phone basically becomes the brains of a desktop computer, capable of running any Ubuntu software that’s been compiled for ARM-based processors.

For more information on the new OTA-11 for Ubuntu update jump over to the Ubuntu website for details via the link below.