Boeing has released the first images of the interior it has designed for its CST-100 commercial spacecraft. At the present time the images are just design mockups of what the new commercial interior might look like within the Boeing CST-100 spacecraft.

The Boeing CST-100 is just one of a variety of spacecraft currently under developed by private companies for NASA’s Commercial Crew Program. To replace the retired space shuttle when transporting cargo and crews to the International Space Station (ISS). 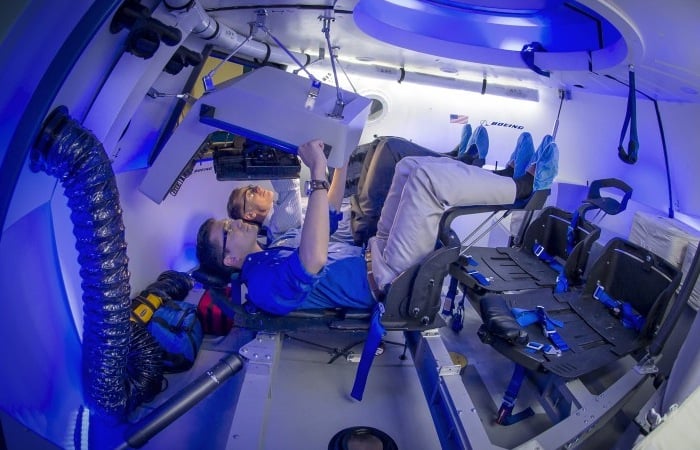 As you can see from the gallery below the interior design for the Boeing CST-100 are very clean in design and are more like something out of a science fiction movie, with plenty of portholes for passengers to be able to view space during their journey. Rachelle Ornan, regional director of Sales and Marketing for Boeing Commercial Airplanes explains :

“Boeing’s teams have been designing award-winning and innovative interiors for our airplanes since the dawn of commercial aviation,”-“Designing the next-generation interior for commercial space is a natural progression. A familiar daytime blue sky scene helps passengers maintain their connection with Earth.”

Chris Ferguson, former Space Shuttle Atlantis commander and current Boeing director of Crew and Mission Operations for the Commercial Crew Program explains : “We are moving into a truly commercial space market and we have to consider our potential customers – beyond NASA – and what they need in a future commercial spacecraft interior,”