Apparently we’ll all be semi-naked in the future. That’s not too far off the mark, if movies like The Fifth Element and Planet of the Apes (the people, not the apes) are templates for upcoming lifestyle trends. Seen below is a startling example of seamless clothes. Call it post-fashion and ultra minimalist from designer Yitzhak Abecassis. Don’t forget to catch the video after the jump. 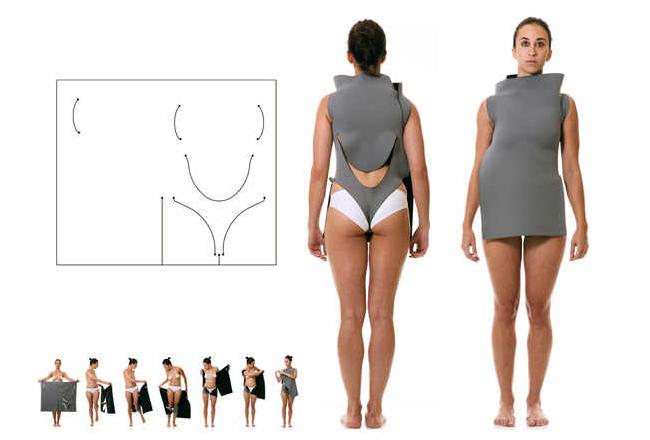 Closely scrutinizing the pic above reveals the fascinating utility of seamless clothing. It basically works like plastic bags or other mass produced peripherals. They come in a flat sheet and are then made ready to use in a few easy moves.

While these futuristic fashion items might not enter the mainstream anytime soon, such clothing does have potential in certain industries. Think doctors and hospitals who discard their peripheral clothing regularly. Stretch that a little farther though and perhaps even military personnel, emergency workers, and people involved in construction could benefit from clothes like this. Even better, Abecassis’ design leaves a lot of space for modular features.

Though the seamless clothes’ lack of fashion sensibilities may be off putting, their undeniable utility still has a chance at inspiring new attitudes towards what humans wear.