There’s gonna be a World of Warcraft movie! Diablo 3 late next year! Start Craft 2 expansions until 2014! How do we know? Easy, look at the chart underneath—a Chinese manager from Blizzard somehow leaked this for all the drooling fanboys. 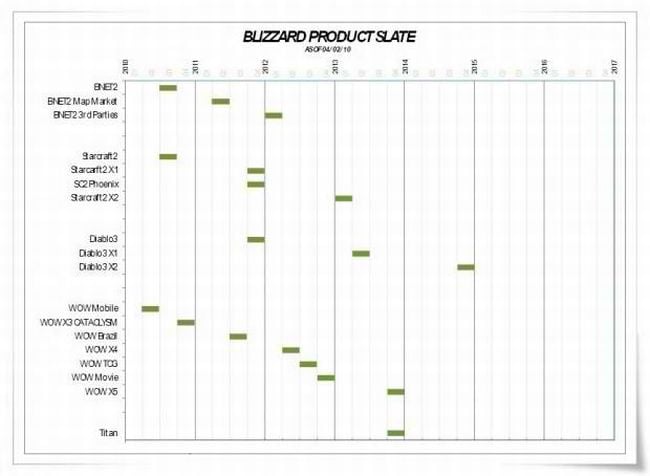 Unfortunately, the erring manager has since been fired/”resigned” thanks to this leak going viral after it was first published at MMOGamesite.com. Good for the rest of us the damage has been done and we can all go to sleep for the next few months giddy with excitement over what’s coming our way soon.

The chart above, with each year divided into quarters, isn’t very detailed but gives a clear idea of Blizzard’s enormous plans until 2015. The extensive add ons to WoW comes as no surprise since it’s Blizzard’s  sacred cash cow, but the WoW movie sure is a head scratcher. A WoW movie?  Is it gonna be like Tron where an unsuspecting gamer enters the faerie realm and battles evil or a total CGI epic?

Since the titles are often represented by cryptic abbreviations, many observers are constantly buzzing about the yet-to-be-revealed “Titan” MMO (it’s at the bottom) due late 2014 and Starcraft Phoenix, not to mention two successive expansion packs for the long-awaited Diablo 3.

As one blog commenter put it succinctly: All these blockbuster releases combined equals Blizzard Entertainment is gonna drown in money.