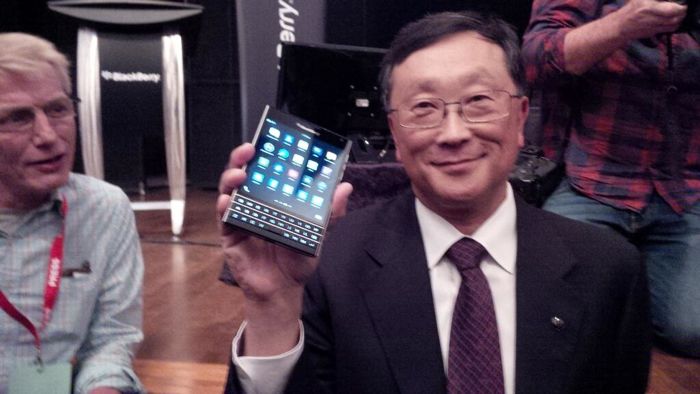 Last week the BlackBerry CEO, John Chen showed off their new BlackBerry Passport smartphone, and now we have a quick video, where the company’s CEO is showing off the device.

The BlackBerry Passport has yet to be officially announced, it will launch in September, and comes with an interesting design, and some decent specifications.

As you can see from the photo and video, the Passport will feature a square display with a three row QWERTY keyboard below it. The display is said to measure 4.5 inches and it will feature a resolution of 1440 x 1440 pixels.

The new BlackBerry Passport is said to feature a quad core Qualcomm Snapdragon 801 processor, it will also come with 3GB of RAM and 32GB of storage.

The handset will be the first device to launch with a new version of the company’s mobile OS, BlackBerry 10.3, and this will bring over 200,000 Android apps to the BlackBerry platform through the Amazon App store.

BlackBerry announced its latest financial results last week, things are improving slightly for the company, as they managed to increase their smartphone sales in their latest financial quarter.

We are looking forward to seeing the new BlackBerry Passport smartphone, as well as the new other BlackBerry devices when they launch later in the year.