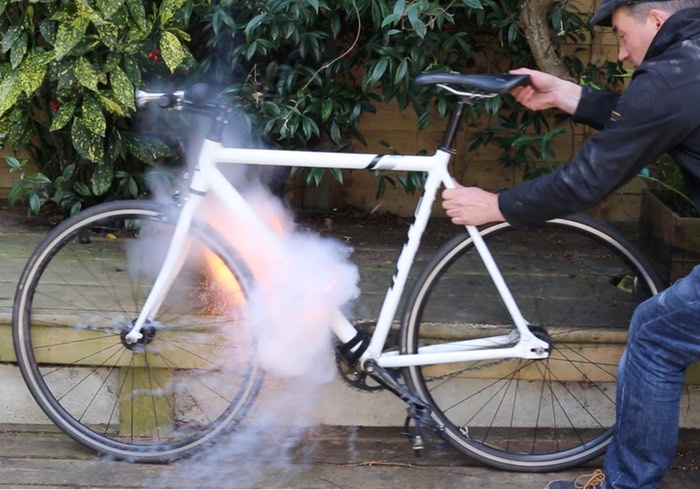 Over the years we have features a number of different antitheft devices which have been designed specifically for bikes here on Geeky Gadgets. But a new device has taken bike theft deterrent to a whole new level and detonates a 150db blast of sound when a bike is moved.

Check out the video below to learn more about this very unique antitheft deterrent which has taken to the Kickstarter crowdfunding website this week to raise the £15,000 in funds that its developer Yannick Read needs to take the project into production.

Even if the device does not scare off any would-be thieves, it is sure to give them a huge fright and also alert you if you are in the vicinity that someone is tampering with your bike. Its creator Read explains more about the inspiration behind Bike Mine.

When thieves come for your stuff in the dead of night they have a massive advantage. You are asleep. They have time to carry out their mischief in peace. The answer is BIKE MINE – the world’s loudest alarm. A quick, safe and reliable way to protect your stuff from thieves.

When tripped by a thief, BIKE MINE detonates a 150db blast of sound; more than enough to startle a thief and raise the alarm. It’s a simple, low-tech idea that protects your bicycle, motorbike, boat or jet ski – or anything else that’s stored on your property. BIKE MINE comprises a length of titanium wire, a spring-loaded trap and a small detonator. Velcro straps allow it to be attached quickly to protect almost anything you store outside or in a garage or shed. It’s robust steel construction is covered in a rubber skin to protect your property.

The Bike Mine is now available to back via Kickstarter with pledges starting from £49, follow the link below for more information.