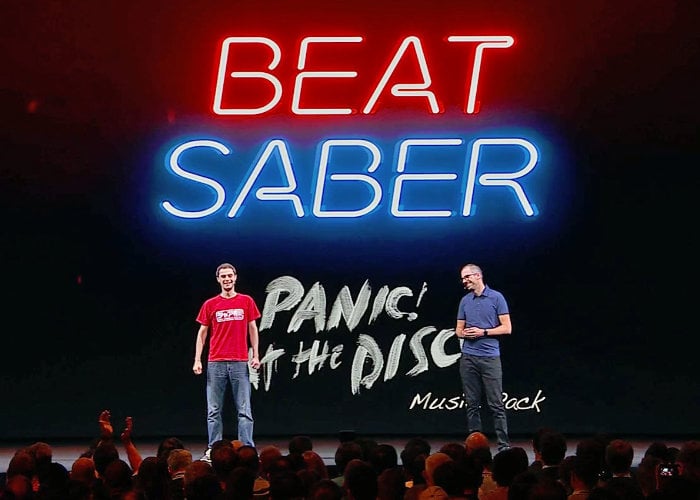 This month Beat Games the developer of the popular virtual reality Beat Saber game has unveiled its new 360 Mode that will be making an appearance during December 2019. Currently the Beat Saber game allows users to wield virtual reality lightsaber style ones to cut oncoming blocks in time to a choice of different music depending on your level of skill and music preference. Beat Saber will also receive new music content next week in the form of tunes from Panic! At The Disco.

Very little is still unknown how the new 360 Mode will use music to enable a 360° gaming scenario but more information is available over on the Road to VR website by following the link below. Ben lang from Road to VR explains a little more :

“Beat Saber already features the standard mode and ‘one saber’ mode, both of which have unique maps across four difficulties. That means that to make one song level for Beat Saber, the developers need to hand-craft eight unique maps if they want to serve every difficulty of both modes. Introducing 360 mode means not just more complex mapping, but four additional beat maps for each song (if they choose to cover all songs and difficulties with the 360 mode), meaning each song needs 12 hand-crafted beat maps.

Beat Games says that 360 mode will debut first on Quest because of its untethered 360 tracking, but it expects that a similar mode would come to other headsets later in a way that confines the rotating notes to some area in front of the player (so that they don’t get wrapped up in their cable), perhaps a ‘180 mode’. Without incredibly careful mapping and testing, it seems unlikely that 360 maps could easily be automatically converted into 180 maps though, so again, a 180 mode might mean yet more complexity and work when it comes to beat mapping.”

Ladies and gents, this is the moment you’ve waited for…

The Panic! At The Disco Music Pack is landing in Beat Saber next week! @PanicAtTheDisco pic.twitter.com/wUbY9xdhH0