Today the BBC has unveiled a new beta homepage design specifically designed with touchscreen devices in mind. The new beta version of the BBC homepage launched at 10 am this morning and has been re-designed to make the BBC homepage more relevant to a broader audience, say the BBC.

During the beta phase the BBC will be adding new features tweaking the design and has asked for user recommendations, so if you have any feedback or suggestions you can contact the BBC via email. Even though the new website still carries a beta development tag is its very close to launch. So don’t delay with your feedback or you might miss the boat. 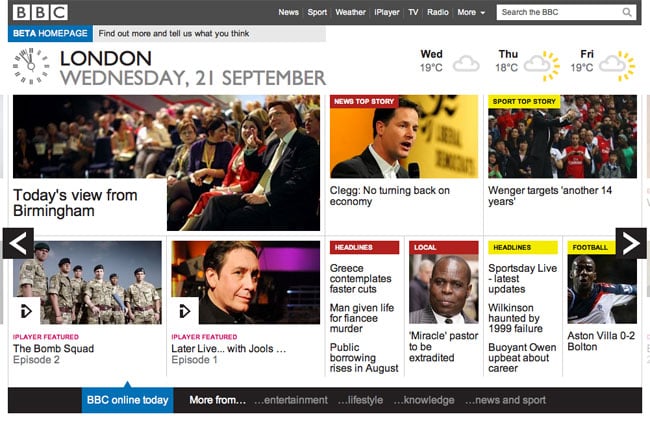 “In January 2011 the BBC announced its plans to reorganise the BBC’s online service into ten product areas, including the BBC Homepage. BBC Online is a distinct service that sits alongside our radio and television output, and the homepage should provide a window onto the whole world of the BBC.”

You can view the new beta BBC website design now and f you are interested in more information the BBC has created an interactive guide to the new BBC Homepage, with a walk through of its new features.