Rick Prescott must be feeling like a million bucks right now, even if the official cash prize for topping the MAKE/Design News Gadget Freak Design Contest is only $1,000.

The reason is pretty clear cut given the success of his diabolical creation. While Mr. Prescott is far from Thomas Edison incarnate, his target-acquiring and heat-seeking spin on a humble Nerf gun has literally blown away the competition. It will likely blow you away too if you cross the guy. 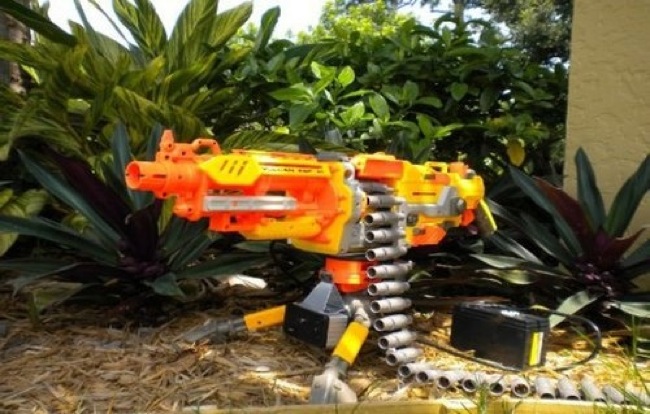 Designed for the sinister purpose of keeping intruders away from his office cubicle, Mr. Prescott describes the Nerf Machinegun’s use as necessary to “speed interaction with less desirable visitors.” While this smacks of a disturbed misanthropic paranoiac’s line of reasoning, it in no way diminishes the man’s coolness.

Before we forget here’s a rundown of the weapon’s key components: Devantech TPA81 motion sensors and an ATmega 168 microcontroller are attached to a tripod mounted Nerf gun. Judging by the pics, it’s got an independent power source and an ample supply of ammo. If this were an equation it would equal much (bloodless) carnage.

Besides your office, this is great for lawns often intruded on by kids and local pets sniffing around for a place to do their business. Zombies too.