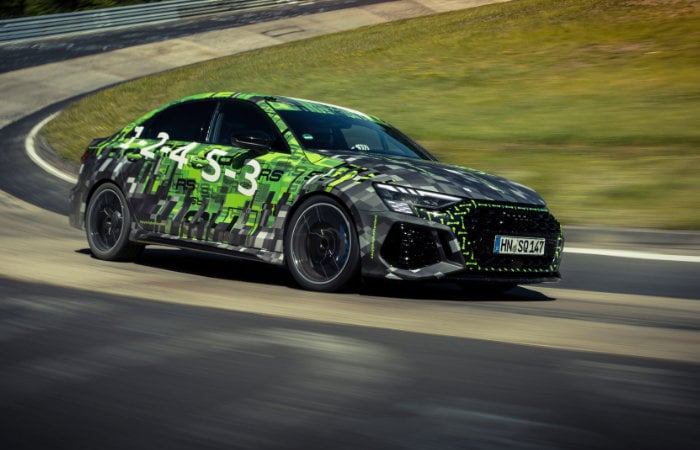 Audi has today announced that its Audi RS 3 has set a new lap record on the Nürburgring in the compact class clocking up a time of 7:40.748 minutes and setting a new top speed in the compact segment on the Nürburgring Nordschleife. Back in June Audi Sport racing and development driver Frank Stippler beat the previous lap record in that class by 4.64 seconds. Above all, the torque splitter, with its fully variable torque distribution on the rear axle, contributed to the record time says Audi.

“I’m proud of the whole team. Everyone worked hard for this day,” said Audi RS 3 Technical Project Leader Marvin Schwätter when the record time appeared on the board. “When we started development, we didn’t know just how quickly our compact sportscar would really be on the Nordschleife,” he explained. “But over the course of endurance testing, we determined that we could reach very good times and set a new record.”

“The basis for the record is the interplay of top technologies. For the first time ever, a torque splitter is being used in an Audi model. It distributes torque fully adjustably between the rear wheels – controlled via amultiple disc clutch on each of the drive shafts. During dynamic driving, it increases the drive torque to the outer rear wheel with the higher wheel load. This means that on right turns, there is more torque on the left rear wheel and the opposite on left turns. The RS 3 therefore turns into the curve even better and follows the steering angle more precisely. “In general, the new RS 3 is much more agile when driving from the middle of the curve to its end and when accelerating out of the curve,” said Frank Stippler.”