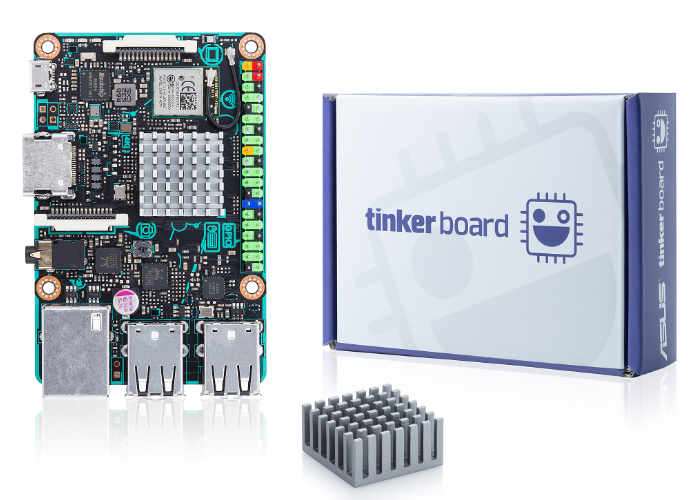 Hardware manufacturer ASUS has this week announced the launch of its new ASUS Tinker Board in the United Kingdom after previously making available throughout the US.

The single-board computer (SBC) has been created to compete with the likes of the Raspberry Pi and is perfect for creating Internet of Things, robotic projects and It is compatible with a wide range of leading SBC chassis and accessories.

The Asus Tinker Board is a fast and powerful computer with all the great features of the Raspberry Pi but with more grunt under the hood. The Asus 90MB0QY1-M0EAY0 Tinker Board is a 8.5cm by 5.3cm single board computer that features a quad-core Arm Cortex A17 CPU running at 1.8GHz, ARM Mali-T764 GPU, and 2GB of DDR3 memory. There is hardware support for H.265 4K decoding instead of just 1080p, almost double the benchmark score in Geek bench than the Raspberry Pi 3 model B, which should equate to better 3D performance.

This board has the exact same footprint and components layout as the Raspberry Pi 3 with an operating system based upon the same Debian distribution as the Pi OS which supports Kodi for around-the-home media streaming. This board could be a drop-in replacement for the Raspberry Pi in many circumstances. The Tinker Board has a fast on-board processor to increase its operational speed. It also features Wi-Fi and Bluetooth capabilities to enhance the functionality to allow connection to a variety of wireless networks, this includes a gigabit Ethernet, support for SDIO 3.0, and swappable antennas for the built-in 802.11 b/g/n Wi-Fi module.