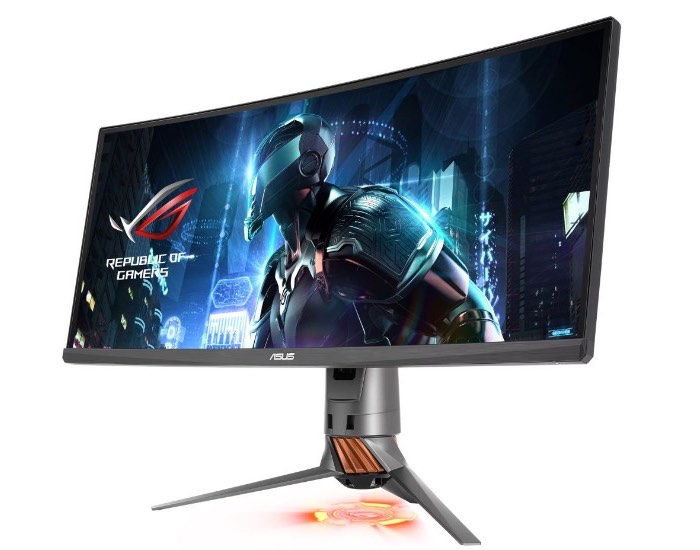 The gaming brand of Asus, Republic of Gamers has this week announced the launch of a new addition to their gaming monitors that was first unveiled at CES 2016 this year and won a 2016 CES Innovation award, as well as providing support for G-Sync in a 34-inch Ultra-Wide QHD curved monitor.

The Asus ROG Swift PG348Q monitor provides users with an aspect ratio of 21:9 for “panoramic gaming” says Asus and offering a massive resolution of 3440 x 1440 pixels.

The new flagship of the ROG monitor fleet, the Swift PG348Q expands your scope, allowing faster target acquisition while increasing immersive visuals with a 34-inch 3440×1440 curved ultra-wide IPS panel. Bristling with advanced display tech, the newest Swift PG348Q also features NVIDIA® G-SYNC™ technology for smooth and seamless gameplay, while simultaneously sporting a 100Hz refresh rate, eliminating roadblocks between your skill and victory. Add the armoured design and unique ASUS features and you’re looking at a monitor that is truly unrivalled.

Other features of the ROG Swift PG348Q monitor include a 1000:1 contrast ratio, 100 percent sRGB colour gamut, 10-bit colour for 1.07 billion distinct hues, as well as the ability to overclocked the refresh rate of the monitor to 100Hz from 60Hz, using the included Turbo Key if required and is equipped with a 4-port USB 3.0 hub and two 2 W speakers.

Asus will be making available the new flagship gaming monitor at the end of this month in Singapore pricing it at SGD $2,099 and finished in either Armor Titanium or Plasma Copper colour schemes. Although no details have been announced as yet about worldwide pricing or availability, but as soon as more details are released by Asus will keep you up-to-date as always

If you are looking for smaller displays specifically designed for the awesome Raspberry pi check out our Raspberry Pi Display HAT Guide.