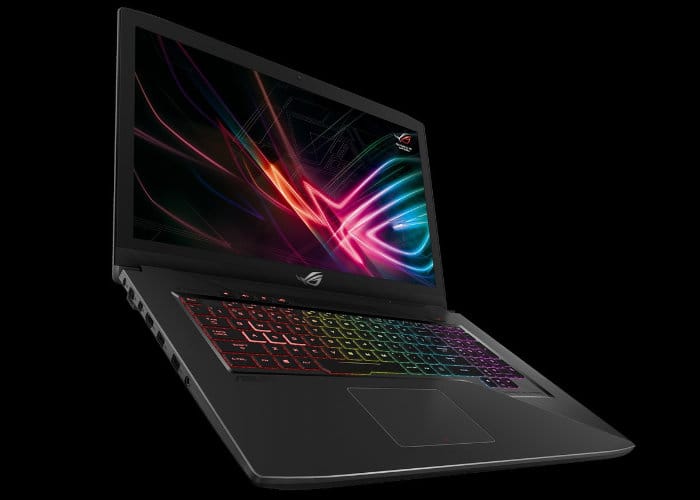 Asus has announced the imminent availability of two new gaming laptops to their range of Asus Republic of Gamers (RoG) range, in the form of the Strix GL503 and GL703 gaming laptops. Offering 15.6-inch and 17.3-inch displays with power supplied by the latest 8th Generation Intel Core processors and NVIDIA GeForce GTX 10-Series graphics. The new gaming laptops have been specifically designed with Esports applications in mind and feature the patented Anti-Dust Cooling or ADC system to cope with longer gaming sessions, says Asus. The new gaming laptops are also equipped with the companies Aura Sync lighting technology enabling owners to synchronise the colours of their gaming setup to games being played or special modes or actions.

The Esports laptops can be equipped with up to 32GB of dual-channel DDR4 SDRAM and the “ patented ADC system enables Strix GL503 and GL703 to expel harmful dust particles and dirt to improve system stability and durability. Foreign particles in the fan module are blown along the fan walls and out of the chassis through the anti-dust tunnels. This prevents dust buildup on the heatsink fins – dust accumulation on the heatsink often results in compromised cooling performance.”

As already mentioned both gaming laptops are equipped with NVIDIA GeForce GTX 1050 Ti graphics and the GL703 features a 17.3-inch full HD IPS-Level display, offering a 60Hz refresh rate, and a 100 percent sRGB colour gamut. For full specifications and ordering details jump over to the official Asus website by following the link below. Unfortunately, at the current time Asus has not announced any details on pricing.