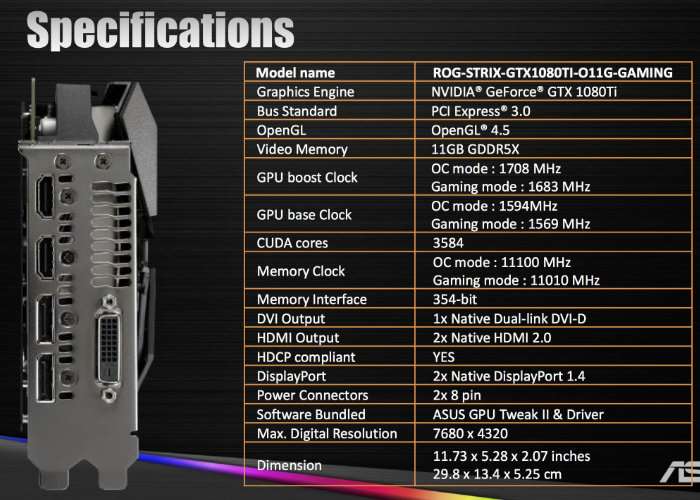 Specifications for the new ASUS GeForce GTX 1080 Ti STRIX graphics card have been unveiled ahead of its launch, thanks to a leaked press release which was accidentally published.

Before being removed once again the ASUS press release revealed that the GeForce GTX 1080 Ti STRIX out-of-the-box gaming mode will provide users with a graphics card clocked at 1569 MHz core equipped with a 1683 MHz GPU Boost, and an untouched 11 GHz (GDDR5X-effective) memory.

The OC ModeOn the other hand offers a a clock-speed preset that you activate with the included GPUTweak II software, runs the card at 1594 MHz core, 1708 MHz GPU Boost, and 11.1 GHz memory. the Tech Power Up website explains more :

It turns out that the DirectCU III cooler deployed on the GTX 1080 Ti STRIX is indeed beefier than the one found on the GTX 1080 and GTX 1070 STRIX cards; with ASUS claiming up to 30% lower temperatures, thanks to a 40% increase in surface area of the heatsink.

ASUS took advantage of the heavier heatsink to lower fan-noise, which it claims to be significantly lower than the reference-design card. The company is also using a newer thermal interface material (TIM) called “MaxContact,” which due to its particle density, can get up to 10 times flatter than conventional TIMs, for lower thermal resistance posed by the TIM, and higher conductivity. Display outputs of this card include two each of HDMI 2.0b and DisplayPort 1.4 ports.

Unfortunately, no information on pricing or worldwide availability has been leaked as yet by ASUS, but as soon as information comes to light we will keep you updated as always.