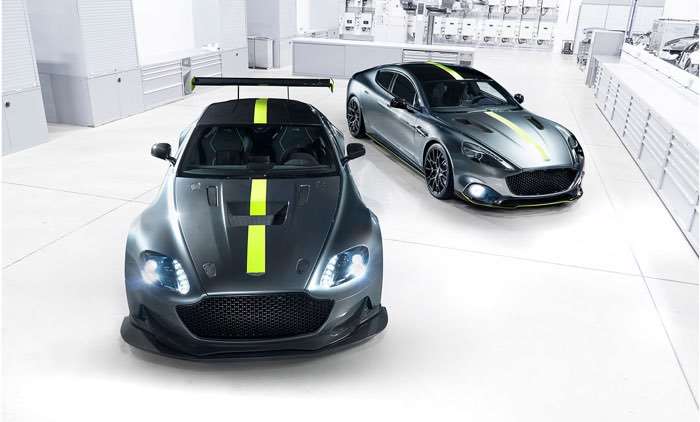 Aston Martin has announced a new brand AMR at the Geneva International Motor show and the company has show off two concept cars under the brand.

Two AMR concepts have been unveiled in Geneva: The Rapide AMR and Vantage AMR Pro. The Rapide represents the first tier of AMR, enhancing the four-door sports car with a comprehensive suite of power, chassis and styling upgrades, plus a spectacular new interior treatment. The Vantage AMR Pro – heavily influenced by Aston Martin Racing’s WEC winning V8 Vantage GTE – is the pinnacle; an uncompromising demonstration of AMR’s ‘Track to Tarmac’ philosophy whereby race technology is transferred to road cars.

Marek Reichman, Aston Martin EVP and Chief Creative Officer, says that the AMR brand was a logical next step after the ’sold-out’ success of limited edition sporting versions like the Vantage GT8 and Vantage GT12: “Each time we have pushed the boundaries and done something extreme, the customers have loved the cars. AMR enables us to take Aston Martin into a new dimension. One where we can turn-up the sporting DNA present in all of our models and make a true statement. An AMR model will have an instantly recognisable design language. One that accentuates and amplifies, together with the latest GT race car technology for the road. They will be special and rare cars that are credible, thrilling to drive and hugely desirable to own.”

You can find out more details on these new AMR cars from Aston Martin over at their website at the link below.