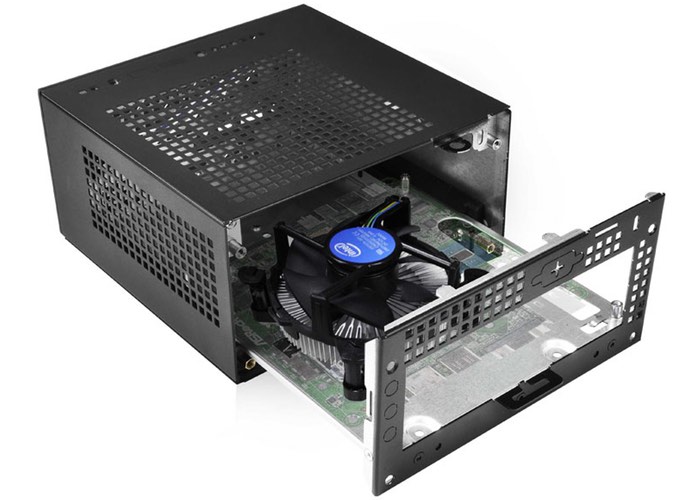 Intel and ASRock have combined forces to create a new desktop mini PC in the form of the ASRock DeskMini, which comes with the handy features enabling owners to upgrade the on-board processor, to suit their requirements or add extra power at a later date if necessary.

The new ASRock DeskMini minicomputer system has been based on the latest Mini Socket Technology Extended form factor or Mini-STX and yet offers enough space for a standard Intel box fan, together with 2 x 2.5 inch disk drives.

ASRock DeskMini hitting 392 cb CPU score on Cinebench R15 with an Intel® Core i3-6100 processor, while other systems don’t even come close with a Core i7-6500U processor.

Moreover, while the whole setup is much smaller and power efficient than traditional desktop systems, it is also way more powerful than the current NUCs in the market. After conducting a series of tests, it was evident that ASRock DeskMini rocked the Cinebench R15, Sandra and 3DMark scores with an Intel Core i3-6100, compared to other mini PCs that sported a Core i7-6500U.

We are excited to be working with ASRock as an ecosystem partner on innovative products. The Mini Socket Technology Extended (Mini-STX) form factor adds the flexibility to support Intel LGA 1151 socket-based Intel® processors in the mini PC segment. Ultimately, the Mini-STX component stack provides valuable configurability options for the channel, by extending the DT tower building block model into some of the smallest mini PCs available today.

For more information on the new ASRock DeskMini jump over to the official ASRock website for details via the link below.