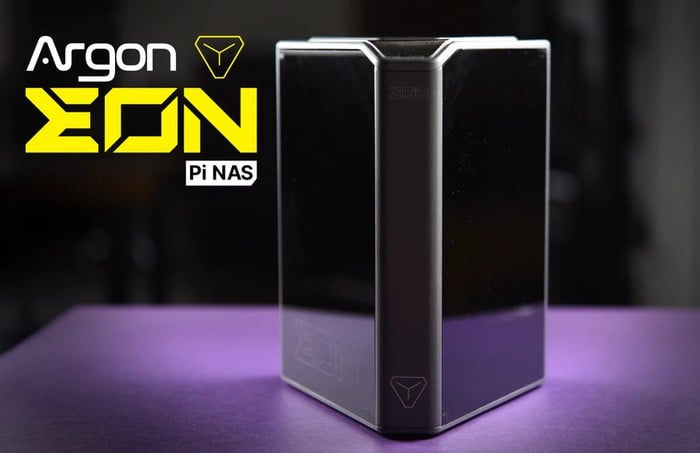 The team of engineers and designers at Argon40 who have created a number of excellent Raspberry Pi cases in the past for media, gaming and desktop workstations have once again returned to Kickstarter to launch their new Argon EON Raspberry Pi 4 NAS storage solution. Features of the NAS include 4-Bay SATA Hard Drive ports that will fit two 3.5” SATA HDD and two 2.5” SATA HDD/SSD offering a maximum capacity of 40 TB with a maximum of 10 TB for each bay.

Other features include a real-time clock which is built into the Argon EON enabling you to carry out scheduled tasks previously not available when using a barebones Raspberry Pi mini PC. Access to all GPIO pins is also provided and the NAS features an upgraded power supply providing 12 volts 5 Amps.

“Our first major project dubbed Argon ONE was launched in Kickstarter back in 2018 and has now reached thousands of satisfied users. We take pride in this accomplishment as an enabler of both Noobs and experienced makers through their journey of building cool stuff. Argon EON, a 4 – Bay SATA NAS Enclosure, powered by the most versatile single board computer. By the very nature and essence of the Raspberry Pi the Argon EON is a Build Your Own Network Attached Storage (BYO-NAS).”

Backer early bird pledges are now available for the innovative project from roughly $92 or £68 (depending on current exchange rates). Assuming that the Argon EON funding campaign successfully raises its required pledge goal and the project progresses smoothly, worldwide shipping is expected to take place sometime around December 2021. To learn more about the Argon EON Raspberry Pi 4 NAS project view the promotional video below.

“The cyberpunk inspired design of the Argon EON made no compromises when it comes to both form and function. The space grade aluminum allowed us to play around with ultra modern and angular forms without compromising the rigidity and structural stability of the enclosure. We also took advantage of the natural heat conductivity and dissipation of the aluminum to augment the built-in controllable fan to cool down both the Raspberry Pi and hard disks even at heavy loads.”

For a complete list of all available campaign pledges, stretch goals, extra media and engineering specifications for the Raspberry Pi 4 NAS, jump over to the official Argon EON crowd funding campaign page by following the link below.