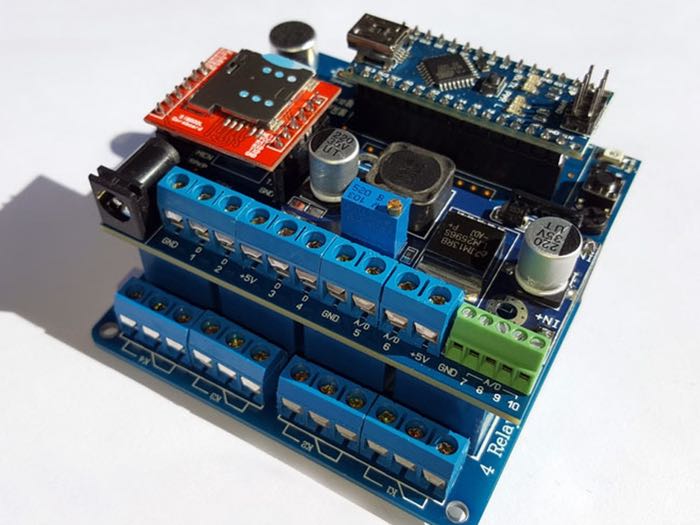 SMB has unveiled a new open source Arduino SMS switch box and gateway they have created called the SensorMessageBox, which is Arduino compatible and provides a simpler way to control SMS messages from the platform.

Features of the Arduino SMS board include :

• The SMB has 10 inputs: default divided in 8 digital inputs and 2 analog inputs. Four inputs are digital-only, but depending on your requirements the other 6 can each be set in analog or digitalmode.
• The SMB has an onboard temperature sensor for monitoring the minimum and/or maximum temperature in Celsius or Fahrenheit. In addition, 6 extra temperature sensors can be connected.
• The 4 relay’s can be controlled by the inputs, by SMS or by Phone call (DTMF).
• For each input can be defined which relay’s must be switched and/or which phone numbers receive a text or phone message. Each input and each relay can get its own name that is visible in the SMS.
• A maximum of 8 phone numbers can be stored in the SMB.
• You can make a phone call to the SMB for listening in (built in microphone). During this call you can control the relay by DTMF (phone’s keypad).
• Receive a phone call from the SMB when a alarm is detected and during this call you can control the relay by the phone’s keypad.
• Quad band GSM modem for use in nearly every country.
• If you don’t want the onboard microphone, it is easy to physically disconnect it. Than you can connect a extern microphone.
• Incoming calls will not be answered if the caller is not in memory, incoming SMS from unknown origin will immediately be deleted.
• The SMB can also be used as a SMS gateway so you can easily send text messages from a PC or other source (Arduino, Raspberry, etc.).