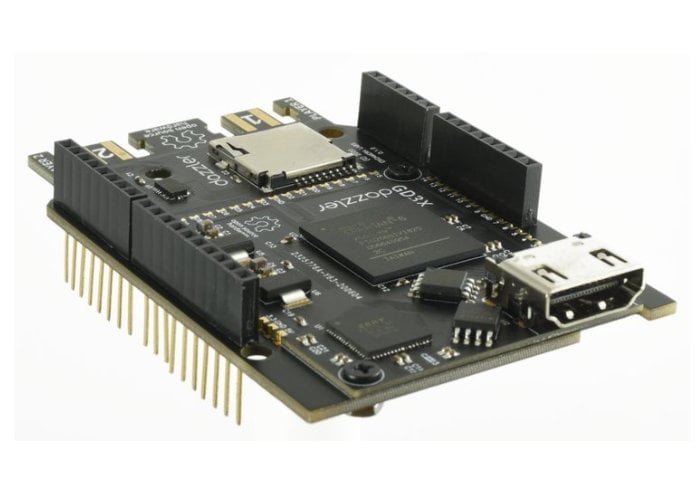 The Gameduino 3X Dazzler is an Arduino Shield capable of outputing HD picture and sound to any HDMI display or TV. The open source GD library drives the onboard FT815 GPU. This GPU is a state-of-the-art embedded video engine, with:

“The Dazzler is ideal for game designers using Arduino or CircuitPython, makers who want rich, responsive data and text visualizations, and anyone who wants superb visuals for their Arduino project. The graphics and sound are generated by a powerful BT815 EVE embedded GPU. The shield also has two Wii Classic ports for a plug-and-play game console. With an easy-to-use graphics drawing API and dozens of samples and demos to use as starting points, it’s by far the most powerful Arduino games system available today. Every aspect of the design is open source and hackable:the PCB design, the Verilog code for the HDMI, J1 CPU and system peripherals, the J1 CPU running on the FPGA and the J1’s firmware that drives the Dazzler’s extra features.”

Features and specifications of the Gameduino 3X Dazzler Arduino Shield :