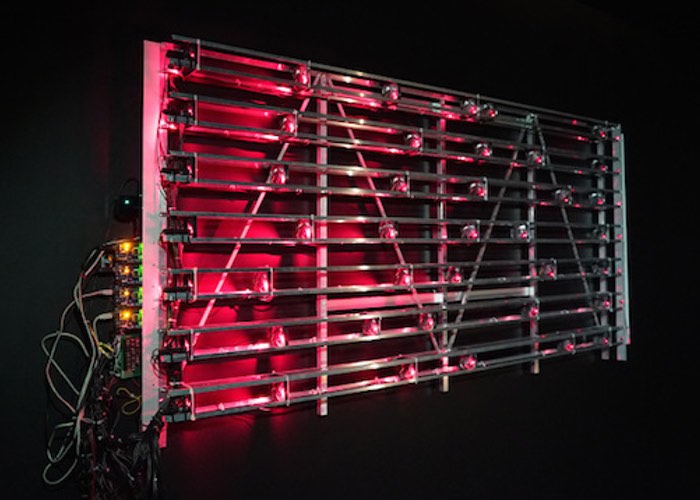 Arduino enthusiasts looking for a little inspiration for their next Arduino project may be interested in this Arduino music machine which is being created and uses 7 lasers and 42 fans to create very unique sounds.

The system is powered by four Arduino Mega boards and can be seen in action in the demonstration video below. Its creator explains more about the inspiration and design of the Arduino music machine, which was inspired by Rhythmicon, the world’s first rhythm-machine created by Léon Theremin in 1931.

This project is an autonomous light-music installation. The main element of the piece is the construction fixed on the wall, with 7 powerful red lasers which send light horizontally. The laser rays pass through several pc fans rotating on high speed, placed along whole length of the installation. The fans serve as dividers-modulators which turn the ray into rhythmic impulses instead of the permanent ray. The frame opposite from the emitters has photo sensors which register the presence or absence of the ray. Thus, the system has 7 independent binary variables which become the basis for creation of sound composition. The speed of the each of fans is variable which leads to constant shift of modulation phases of the light rays.

The central idea of the project “Divider” lies in an abstract artistic interpretation of the wave-particle duality concept that every physical object may be described mathematically in terms of wave quotations, as well as from a formalist point of view that conceives object as a particle or a particle system. As a textbook example of that duality, we can think of light as a particle (photon) flux, which works like an electromagnetic wave in various physical experiments. In the artwork, the rays are interrupted repeatedly and constantly, but not simultaneously – as to create a polyphase source of uncertain events.

The uncertainty relation sets the lower limit for the product of the paired observables standard deviations. The principle of uncertainty discovered by Werner Heisenberg in 1927 is one of the milestones of quantum mechanics, and is a corollary of the wave-particle duality principle. Eventually, the divided and unstable system transforms into a set of binary states, which make light into a discrete message matrix, which, in turn, generates sound waves (a musical composition). Thus, the work attempts to use the experimental language of art to bring up and describe the global issues – is the universe discrete? can we describe the universe with the language of energy, frequency, and vibration – in accordance with the testament of Nikola Tesla?

For more information on the new Arduino music machine jump over to the Vtol website for details by following the link below. If you enjoyed this article you are sure to enjoy how to build your very own Arduino wind speed meter or anemometer project which is easy to build with basic Arduino skills.