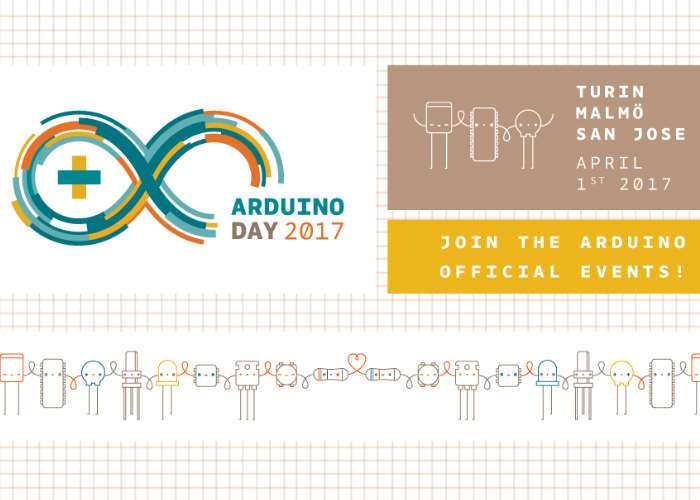 Those of you attending this year’s Arduino Day in Turin, Malmo and San Jose, will be pleased to know that the official Arduino foundation has today announced the schedule of events for April 1st, 2017.

The Arduino immunity is planning more than 480 events around the world so don’t worry if you can’t make it to one of the official events there were plenty of information online documenting the events and projects.

The official Arduino website explains a little more about what you can expect from the days events :

Arduino Day Turin will feature talks by Massimo Banzi, Federico Musto, and other Arduino members, which will be streamed live on the Arduino Facebook, Twitter and YouTube channels. The streaming will begin at 3pm CET. A final program of presentations will be posted as soon as possible at this link. Starting at 11am CET at Toolbox Turin, the agenda will include: two workshops for children in collaboration with Fablab for Kids (registration here and here), a basic and an advanced workshop for adults in coordination with the Casa Jasmina crew (registration here and here), as well as a young Maker activity corner supported by Codemotion Kids. Everything will be free of charge.

Arduino Day Malmö festivities (full program here) will consist of an Arduino project showcase, a panel of discussions with David Cuartielles and local Makers, in addition to a pair of free activities for kids (registration is not necessary). Starting at 5pm, there will also be a live streaming of the talks from Arduino Day Turin.

Last but not least, the Arduino team will be hosting a third official event in San Jose, CA (register here). The program will kick off with a demonstration of Arduino projects, followed by a live video exchange with Arduino Day Toronto. This is a great opportunity for Arduino enthusiasts in America to socialize with one another, exhibit their latest creations, and even learn more about Arduino in the classroom. Everyone is welcome to attend!