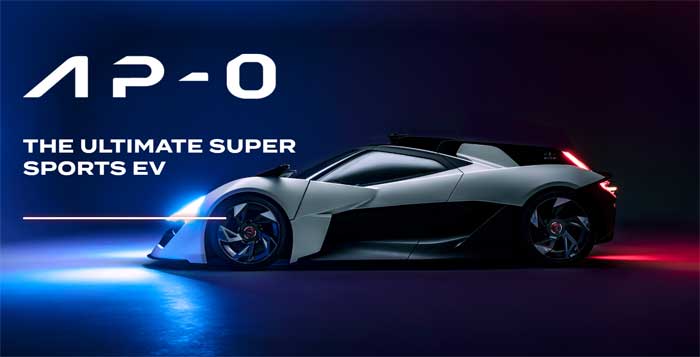 A company called Apex has announced its latest electric supercar called the Apex AP-0. The car is fully electric and uses a carbon fiber tub with modular space frames combined with a central spine of carbon fiber that runs across the top of the car. The car features lots of exposed carbon fiber.

The body was designed with aerodynamics in mind with front bodywork that channels air under the car and behind the front wheels. The bodywork also channels air along the body out underneath it through a large rear diffuser. The vehicle has a flat belly that exploits ground effect principles to help the car stick to the road for improved cornering capability.

The battery pack is in the floor the car and has 90kW of power. The vehicle weighs in at 1200 kilograms with the electric motors producing 650 horsepower. That much power pushes the car from a stop to 62 mph in 2.3 seconds. Few other details are offered on the vehicle at this time.