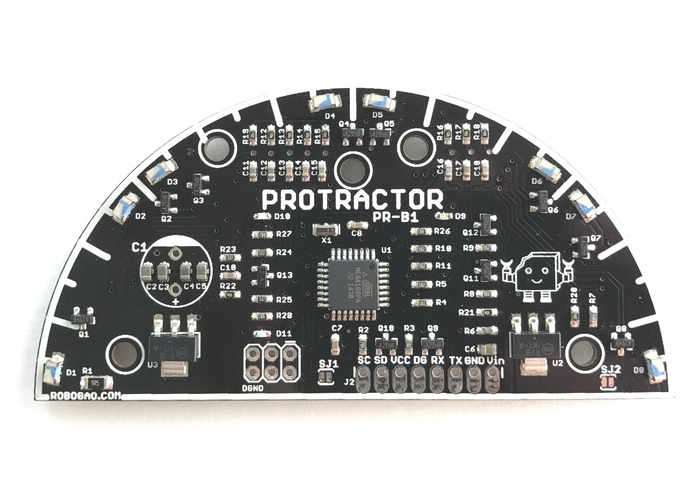 Electronic enthusiasts that need to measure angles on their robotic arm or other projects may be interested in a new proximity sensor that has been created by William Moore called the Protractor.

The Protractor sensor can enable your robot to find objects and navigate around with ease thanks to its ability to measure angles. Watch the demonstration video below to learn more about its features and functionality and how it can enhance your latest project.

Protractor has this week been launched by a Kickstarter and is now available to back with pledges for early bird backers priced at just $27 and shipping expected to take place during November 2017.

This developer explains more about the inspiration behind Protractor and its embedded technology.

A lot of sensors can tell the distance to an object, but there just aren’t any good ways to measure angles. Knowing the angle between your robot and nearby objects and open pathways is super useful, allowing your robot interact with its environment in real time.  Challenges like obstacle avoidance, maze solving, mini sumo, and others are so much easier if you just know the angle.  With a 180 degree field of view, the Protractor can tell you the angles to nearby objects as well as open pathways.

With just a few lines of code, your robot can be running mazes or obstacle courses simply by following the open pathway sensed by the Protractor. Tired of your robot arm bumping into things?  Make it a smart arm using a Protractor!  With a Protractor mounted to your arm, you can spot objects before bumping into them and line up your gripper to make the grab.

For more information or to make a pledge for the new Protractor hardware jump over to the Kickstarter website for details by following the link below.