A new Android app has been created to make it even easier for you to control a number of different commercially available robots, including the iRobot Create, LEGO Mindstorms, VEX Pro, and, of course, custom made Arduino cellbots.

The Cellbot application was written in Java using the Android SDK and is available as a free download, from the Android Market for any Android 2.2 (Froyo) and up phone. Watch the video after the jump to see it in action. 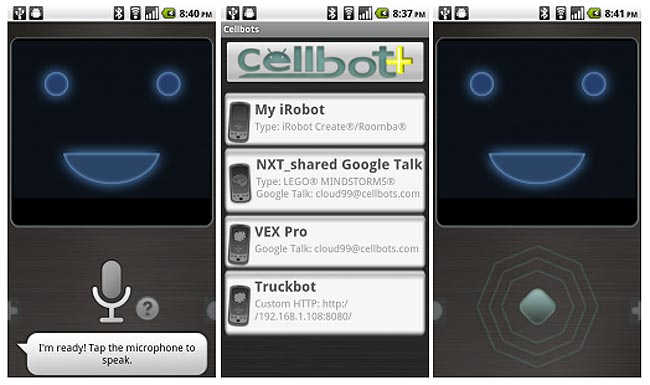 The Cellbot App’s remote control feature allows you to use a number of different methods on your phone to control your robot including a directional pad (D-Pad), a joystick, the phone’s accelerometer, or voice controls to suit your needs.

The commands are sent via Bluetooth and are limited to a range of around 25 feet or so, however this can be increased in needed by mounting the phone to the robot and putting it in Brain Mode. You can now connect to the robot and chat to it via Google Talk where you can simply type text messages such as ‘move forward’, ‘stop’, or ‘picture’.