Nintendo and Sony will be less than pleased with the latest portable gaming figures from Flurry, as they are reporting that mobile gaming, particularly Apple’s iOS and Google’s Android devices now makes up 58 percent of mobile gaming revenue in the US for 2011.

This compares to 2009 when Nintendo held 70 percent of the portable gaming market and Sony’s PSP around 11 percent, back then Android and iOS made up just 19 percent of the market. 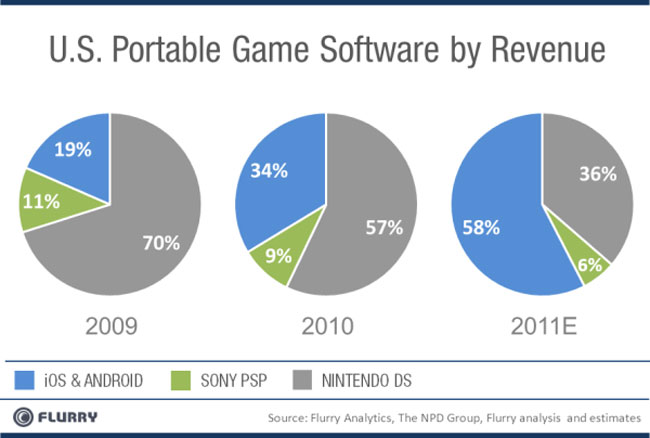 The most striking trend is that iOS and Android games have tripled their market share from roughly 20% in 2009 to nearly 60% in just two years. Simultaneously, Nintendo, the once dominant player, has been crushed down to owning about one-third of market in 2011, from having controlled more than two-thirds in 2009. Combined, iOS and Android game revenue delivered $500 million, $800 million and $1.9 billion over 2009, 2010 and 2011, respectively.

Whilst Sony has embraced Google’s Android OS, and started to bring their games to it, Nintendo has refused to bring any of their titles to either Android or Apple’s iOS.