According to the guys over at GigaOM and Fudzilla, we may see AMD processors featured in Apple’s range of computers in the not so distant future.

It seems that AMD recently told attendees at an AMD Financial Analyst Day presentation that Apple will be one of their partners for its Fusion processing platform. 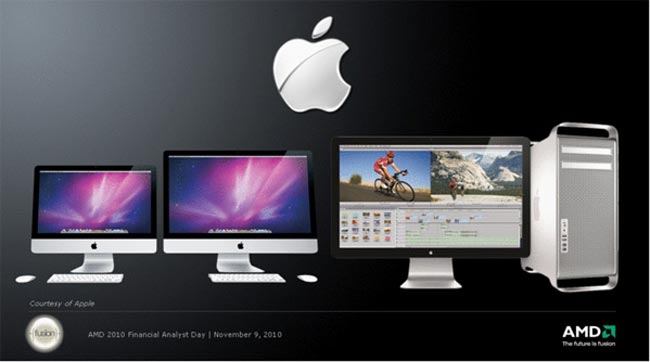 The photo above is one of the slides that was used in the presentation, which was being led by AMD’s Senior VP and Chief Sales Officer Emilio Ghilardi, and whilst he did not comment on the slide, we can clearly see that AMD has apple listed as a partner for their Fusion platform.

This could mean that Apple will be replacing Intel in the next generation of Mac’s, iMac’s and MacBook’s, as AMD’s Fusion platform is due to start shipping shortly, so who knows maybe next years line up will feature AMD processors.