Amazon has now officially launched it new Amazon Singles service which is now available on the Amazon website in the Kindle Store. The new Kindle Singles is a new category of the Kindle store that contains written works that are longer than a magazine article but not as much as a full book between 10,000 to 30,000 words (roughly 30 to 90 pages) Amazon explains. Kindle Singles publications can be downloaded on to any Kindle device or Kindle application. 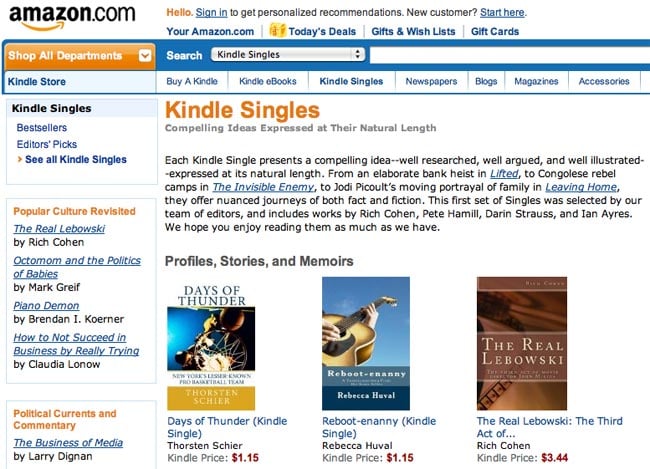 The size of the publications is the “natural length to lay out a single killer idea, well researched, well argued and well illustrated–whether it’s a business lesson, a political point of view, a scientific argument, or a beautifully crafted essay on a current event” Amazon says.

Authors now have a place to funnel those types of creations, and Amazon is calling on “serious writers, thinkers, scientists, business leaders, historians, politicians and publishers to join Amazon in making such works available to readers around the world.”

Kindle Singles publications are currently priced from $0.99 up to $4.99