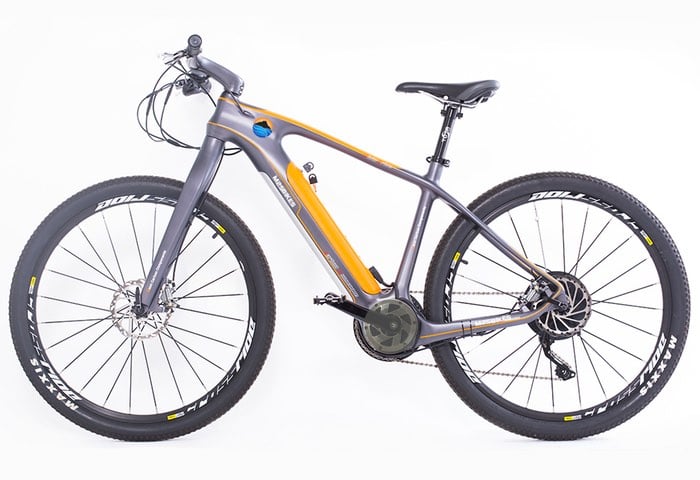 Eric Crews has designed and built an awesome looking carbon fibre electric bike which he has named the All-Go, and this week launched via Kickstarter to raise the $50,000 he requires to take it into full production.

The All-Go electric bike has been designed to be both powerful and lightweight, providing a fun to ride electric bike which is available to back via Kickstarter with pledges starting from $2,000 with shipping expected to start in October 2016.

Electric bikes are quickly changing the way people think about cycling. No longer do hills and tough climbs have to stand in the way between you and where you want to be. But as much fun as most of the electric bikes currently on the market can be, they are often very heavy, which makes carrying them up stairs, loading them onto a bike rack or pedaling them home once the battery dies not a whole lot of fun for anyone. But starting now, that’s about to change thanks to the All-Go, our revolutionary new carbon fiber electric bike.

At just 33 pounds including the battery, the All-Go is an electric bike that feels and rides like a normal bike and allows riders to easily switch between pedal assist modes to take advantage of a powerful mid drive motor that produces up to 600 watts of peak power to give an extra boost to make climbing hills easier than ever before. On the flats, riders can choose to take advantage of extra power to battle headwinds or maintain speeds of up to 28 m.p.h. with ease, or with the push of a button, switch to pedal-only mode and maximize your ride time while enjoying the lightweight efficiency and the effective 27-speed drive-train.

Features of the All-Go electric bike include :

– Mid-Drive 250 watt motor capable of producing over 600 watts of peak power directly to the drive-train to make climbing hills and maintaining speed easier than ever.

– Carbon Fiber frame makes this one of the lightest electric bikes currently on the market. At only 33 pounds, this bike is quick and nimble making it a joy to ride whether using the electric pedal assist or without.

– The 27-speed drive-train makes it easy to maximize pedal efficiency on the climbs, while having enough range to power you through the flats to easily reach speeds of 30 m.p.h.

– Disc brakes with motor cut off ensure that it’s easy to stop the bike quickly and safely.

Lum over to the Kickstarter website for full details via the link below.