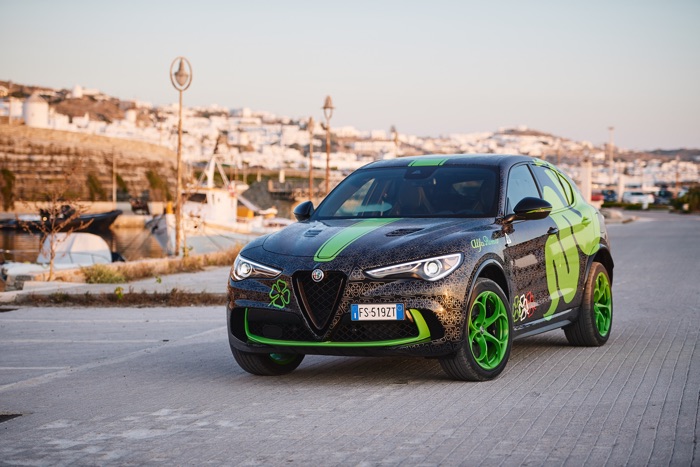 Alfa Romeo has announced that it will be using an Alfa Romeo Stelvio Quadrifoglio for the 21st Gumball 3000, the car maker has given their SUV a new look for the rally.

This years Gumball 3000 takes place between Mykonos and Ibiza, it will end on the 15th of June, you can see more information below.

This year’s Gumball rally will cross Europe, starting from Mykonos and ending in Ibiza on 15 June. The cavalcade will pass through Athens and Thessaloniki, then through to Croatia and Venice before reaching Vercelli, Italy on 12 June. Here Alfa Romeo will welcome the Gumball’s unique mix of cars to the legendary Balocco Proving Ground. This Proving Ground is the birthplace of the Alfa Romeo racing teams’ models which went on to win on the world’s top circuits. The rally will then proceed to Monaco and through to Barcelona, before its final stint in the Balearics.

A special Stelvio Quadrifoglio, taking part in the Gumball, has been given an exclusive livery with custom paintwork created by the Alfa Romeo Design Centre. The Volcano Black bodywork is adorned with a grey cloverleaf motif that reproduces the iconic logo across the entire surface, with fluorescent green accents including include a large snake on the side panels, Alfa Romeo lettering in the classic font on the rear window, and the brand logo occupying the whole roof. The 20-inch alloy wheels are in the same colour, as is the Alfa Romeo logo that stands out on the black brake callipers, specially created to attract attention, aided by the burnished rear light clusters. This Alfa Romeo Stelvio will thrill spectators in eleven European countries, and not just for its performance or the unmistakable Quadrifoglio sound generated by the 2.9-litre V6 Bi-Turbo with its massive 510hp.

You can find out more details about this Gumball 3000 themed Alfa Romeo Stelvio Quadrifoglio over at Alfa Romeo at the link below.