We it seems Apple isn’t the only company capable of writing open letters, as today Adobe has published one from their founders which talks about Adobe Flash and And Apple.

One of the quotes from the letters says ‘If the web fragments into closed systems, if companies put content and applications behind walls, some indeed may thrive — but their success will come at the expense of the very creativity and innovation that has made the Internet a revolutionary force.’ 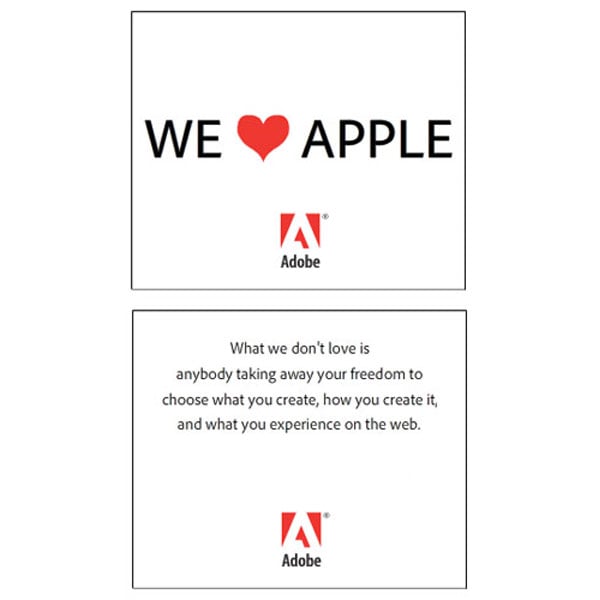 Adobe has also published a couple of advertisements on the web which you can see in the picture above, we like the one which says ‘We Heart Apple’ I wonder if Apple will be releasing a similar advert  saying ‘We Heart Adobe’?

You can see the full details of the open letter below, neither Adobe or Apple seem to want to back down on this, I guess we can expect to see more of this sort of thing over the next couple of months.

Our thoughts on open markets

The genius of the Internet is its almost infinite openness to innovation. New hardware. New software. New applications. New ideas. They all get their chance.

As the founders of Adobe, we believe open markets are in the best interest of developers, content owners, and consumers. Freedom of choice on the web has unleashed an explosion of content and transformed how we work, learn, communicate, and, ultimately, express ourselves.

If the web fragments into closed systems, if companies put content and applications behind walls, some indeed may thrive — but their success will come at the expense of the very creativity and innovation that has made the Internet a revolutionary force.

We believe that consumers should be able to freely access their favorite content and applications, regardless of what computer they have, what browser they like, or what device suits their needs. No company — no matter how big or how creative — should dictate what you can create, how you create it, or what you can experience on the web.

When markets are open, anyone with a great idea has a chance to drive innovation and find new customers. Adobe’s business philosophy is based on a premise that, in an open market, the best products will win in the end — and the best way to compete is to create the best technology and innovate faster than your competitors.

That, certainly, was what we learned as we launched PostScript® and PDF, two early and powerful software solutions that work across platforms. We openly published the specifications for both, thus inviting both use and competition. In the early days, PostScript attracted 72 clone makers, but we held onto our market leadership by out-innovating the pack. More recently, we’ve done the same thing with Adobe® Flash® technology. We publish the specifications for Flash — meaning anyone can make their own Flash player. Yet, Adobe Flash technology remains the market leader because of the constant creativity and technical innovation of our employees.

We believe that Apple, by taking the opposite approach, has taken a step that could undermine this next chapter of the web — the chapter in which mobile devices outnumber computers, any individual can be a publisher, and content is accessed anywhere and at any time.

In the end, we believe the question is really this: Who controls the World Wide Web? And we believe the answer is: nobody — and everybody, but certainly not a single company.