The new SSD Array easily installs itself into a spare PCIe x4 slot ha is equipped with four high performance WD SSDs providing a grand total of 512GB. That can reduce  video render times by up to 80% and increase image processing performance by 360%, some impressive statistics. 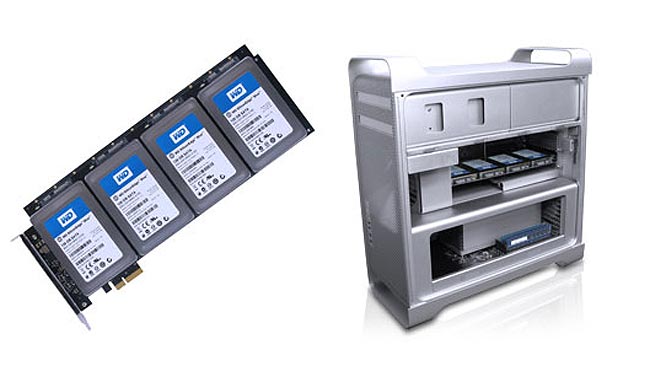 The Array has been put through some tough real life test and using Photoshop v.12 to open, rotate 180, adjust Auto Levels and save as a Photoshop document a 924MB TIFF photo the Mac Array showed performance increases of 360% over a traditional 7200RPM SATA hard drive. Decreasing the required time from 10:45 minutes to just 3 minutes.

The Mac Array comes pre-configured with the Mac BIOS and RAID 0 (striping) for maximum performance. So if you are into high end video editing or just fancy increasing the Mac Pro power considerably. You can now purchase the with 4 x 126GB SSD (512GB) for $1499.