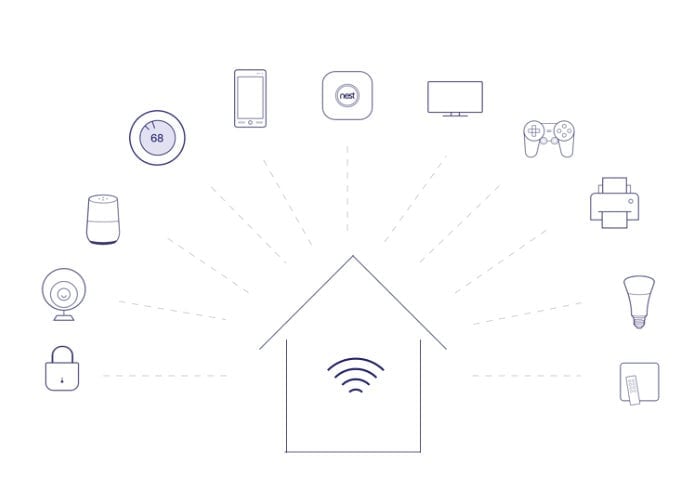 If you’re still waiting to install your first smart home accessory, you might be the last on your block. According to a study by Growth from Knowledge, more than one-third of U.S. consumers own two (or more) smart home devices, while nearly two-thirds of millennials own at least one.

Why is home automation technology, more commonly called smart home technology, so popular? Because it’s built to make home life better. By connecting devices via the internet, home automation systems provide access to everything, from the sound system to the coffeemaker, from a single interface.

The Consumer Technology Association predicts that nearly 30 million smart home accessories will be sold this year alone, a 20 percent increase from 2018. For a point of reference, that’s more people than live in every state but California.

Bright Bets for Your Smart Home

Not sure what smart home accessories to start with? The following products are our top picks:

1. A home Wi-Fi system that detects breaches and keeps your family safe.

Whole-home Wi-Fi is a fancy term for the solution to a common issue: When you walk across the house, you shouldn’t walk in and out your coverage area. Modern internet speeds are more than enough to let you download a file from work while streaming your favorite show, but physical barriers can block the wireless signal.

To prevent misuse by kids and guests, Plume also provides surprisingly granular access controls. Parents can restrict certain devices to specific users, preventing a child from getting on an iPad when it’s time for bed. Without creating a separate network, users can also give guests access to the internet for a specified period of time. Airbnb hosts, for instance, can set up custom passwords that expire after a visitor leaves.

2. A smart oven that can cook everything you can’t.

Most smart kitchen appliances won’t actually make you a better cook. Your app-infused fridge may entertain you, and your smart toaster may save you time in the morning, but neither will make your food taste like it came from a restaurant.

WLabs smart oven may not earn you a Michelin star, but it can help your meals turn out better. Toaster oven, conventional oven, and microwave rolled into one, the countertop smart oven lets you select from 11 cooking modes to customize your meal. And because it can tell the difference between a pizza and an already cooked chicken leg, it won’t overcook your food.

Although you shouldn’t get too far away from a hot oven, the smart oven comes with an app that lets you make changes to its settings from another room. In other words, it means you don’t have to hover over the stove when there’s a game to watch.

3. Intelligent lighting that saves you money — and might save your marriage.

How many nights have you argued with your partner about whose turn it was to turn off the lamp? How many times has your electric bill sparked a debate over who leaves the lights on when they leave for work?

Your partner may not see much use for other smart home technologies, but he or she isn’t likely to feel the same about smart lights. They require minimum installation (just screw in a lightbulb) and even fewer home changes (yes, they work with all your existing light fixtures and lamps). Most smart lights, like the Phillips Hue, can be controlled from your phone or from a remote-controlled dimming switch that lets you change the ambiance from the couch.

Because Hue bulbs can be scheduled to shut off and on from afar, they’re a great way to create the appearance that someone is home while you and your partner are on vacation. And thanks to their long life and dimming features, they’re even cheaper to operate than LED or fluorescent bulbs.

4. Next-generation smoke detectors that co-opt your other smart devices.

Practically every smart device in your home has a camera and a microphone: Why not turn them into smoke detectors? That’s the thinking behind Smoke Detective, which commandeers the sensory hardware of other household devices to reduce the risk of a fire going unnoticed.

It might seem unnecessary to outfit every room in your home with a smoke detector — until you learn that smoke alarms actually fail to sound the alarm in nearly half of house fires. And because many home fires happen because of electrical shorts, the app allows for remote monitoring to notify you of a fire even if you aren’t home.

Whether you’re just starting a smart home or finishing up a space-age mansion, there’s a new accessory out every day. Some of them are more valuable than others, though. So go ahead: accessorize — but save some money for the ones that actually improve your life.