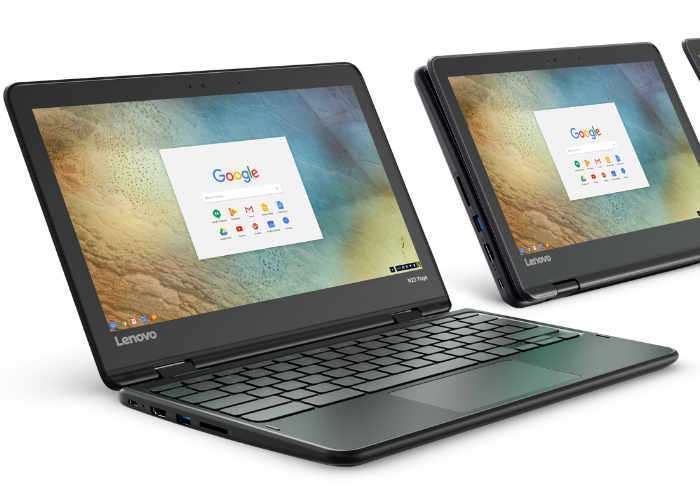 Lenovo has today announced the launch of four new Chromebook systems it has created for the educational market offering new ThinkPad and N23 systems that start from as little as $199.

Equipped with the latest generation Intel processors and brighter displays, the new ThinkPad 11e and 11e Yoga will be available with Windows 10 or Google Chrome operating systems.

The new Chromebook systems take the form of the :

Lenovo explains more about the specifications :

Engineered for education, ThinkPad 11e and ThinkPad 11e Chromebooks are focused on reliability and productivity, both in and out of the classroom.  Passing a vigorous series of 12 military standard spec procedures to ensure maximum durability, using gorilla-glass for maximum screen protection, a water-resistant keyboard and new and improved mechanically anchored keys, the ThinkPad 11e Chromebook can keep up with the demands of a hectic classroom.  And with up to 10 hours’ battery life, it can last the school day and beyond to keep a student’s productivity going.

enovo is also expanding its rugged, designed for education, N series family with the addition of the Lenovo N23 Chromebook and N23 Yoga Chromebook. Like the ThinkPad 11e Chromebook, the N23 is also available in traditional clamshell and Yoga form factors. In addition, the N23 Yoga version is the first Lenovo Chromebook equipped with an ARM-based processor, optimized to run the Google Play Store apps.

Designed for education, both the N23 Chromebooks are portable, powerful and durable, a perfect fit for the classroom on a budget and versatile enough to meet the day-to-day needs of teachers and students. Featuring reinforced ports and hinges, new mechanically-anchored keys and a water-resistant keyboard, both the N23 and N23 Yoga Chromebook are made with the busiest bunch of students in mind and built to last.

Jump over to the official Lenovo press release for full specifications and details on all the new Chromebooks which have been launched today.