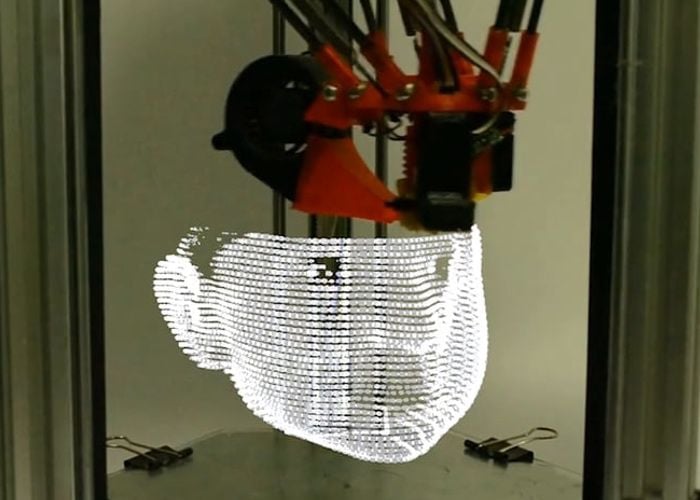 Artist Ekaggrat Singh Kalsi has modified a 3D printer to be able to use light to create a 3D objects in space, by attaching RGB LED to the head of a 3D printer.

Watch the video below to learn more about the project which has been set up using a custom Grasshopper 3D script that is capable of taking any 3D model and convert it into Gcode that can then control the path of the print head and LED.

To record the fascinating 3D prints using light a Nikon D3100 camera was set on a long exposure to recall the pattern as the light was printed in thin air. Its creator explains a little more about the 3D printer setup.

The RGB LED is attached to pins 4,5,6 on the Ramps board.” He also programmed his camera so that it starts and stops automatically, preventing the need to to hold down the shutter release button for extended periods of time. Using an Opto Isolator, he attached one of the Ramps pins to the shutter release button, which allowed him to capture a 3D scan of his daughter’s face and then 3D paint it with light.

For more information on the interesting modification to the 3D printer jump over to the artist’s official website via the links below.